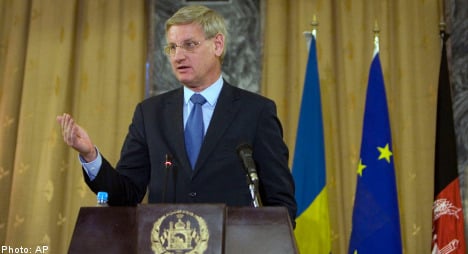 “The last few months have been not good. We have been bordering disaster in terms of credibility,” Carl Bildt told AFP in an interview during a visit to Kabul.

Sweden holds the rotating presidency of the European Union.

“We now need to restore credibility in the process, restore confidence internally and externally. That needs to be done and can be done.”

Karzai will be inaugurated for a second five-year term on November 19 in a ceremony attended by local and foreign dignitaries, officials said Wednesday.

The president will likely announce his cabinet two weeks after the swearing-in, said an official from his office.

“What we are first expecting is a strong reform statement by the president on his inauguration”, followed by the formation of a government with “competent ministers”, Bildt said.

Massive fraud that marred the August 20 presidential election highlighted the scale of corruption in Afghanistan’s government and has led to enormous international pressure on Karzai’s new administration to clean up graft.

Election officials declared him the winner this month when his challenger abandoned a run-off.

EU nations contribute €1 billion ($1.5 billion) annually to Afghanistan and have 35,000 soldiers, including 500 Swedes, in the country.

More than 100,000 NATO and US-led troops are helping the government battle a Taliban insurgency at its deadliest since US-led troops toppled the Islamist regime eight years ago.