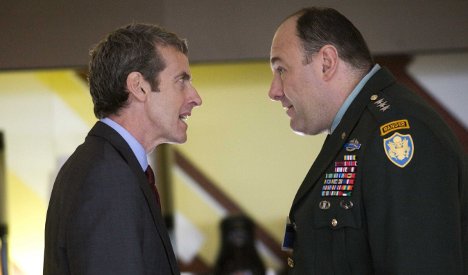 Peter Capaldi and Jams Gandolfini in In the Loop. Photo: IFC Films

The growing minority of Brits in Berlin now have a place established on Berlin’s cinematic calendar. Over the past decade Britspotting has become the most important platform for independent British and Irish films in Germany.

For the German film industry, it’s the ideal place to uncover an eccentric sleeper hit overlooked by the major distributors. For homesick Brits it’s a chance to retreat to the comforts of terraced houses, back gardens, thick gravy and nasal accents.

But Britspotting is not a twee nostalgia trip for the expat. Despite being a non-profit, low-budget festival, hardly a year has gone by when Britspotting did not give German audiences a first look at a future hit – there was, for example, Michael Winterbottom’s “24 Hour Party People” (2003), Edgar Wright’s “Hot Fuzz” (2007) and Martin McDonagh’s “In Bruges” (2008).

This year, the festival has expanded again: apart from the great movies, there are tea parties, coffee evenings, and more. Better yet, the whole thing will be repeated in Leipzig from December 6 – 16.

In The Loop (dir. Armando Iannucci) – This vicious, destructive, ice-cold satire gives us the first really satisfying dramatic portrayal of the run-up to the Iraq war. Iannucci’s movie, which opens Britspotting, stormed the Sundance indie festival in the US and made critics all over the world go floppy with admiration. As funny as the British sitcom “The Thick Of It” from which it sprang, this movie’s subject is a lot darker than its TV original. If it wasn’t so funny it’d be incredibly depressing.

The Last Thakur (dir. Sadik Ahmed) – The classical tragedy is more or less dead in film, but this sparse allegory is a deceptively compelling new rendering of the workings of fate. Set in an eerie, timeless Bangladeshi village, the movie is about a sullen stranger – lost and hungry, but in possession of a rifle – who upsets the power balance between a slick local Muslim politician and a rich and deluded Hindu landlord.

Sounds Like Teen Spirit (dir. Jamie Jay Johnson) – “Heart-warming” and “feel-good” are the patronising adjectives that most critics have attached to this fantastic documentary about the Junior Eurovision Song Contest. But the film itself never condescends to its subjects – young contestants, aged between 10 and 15, whom we follow from Georgia, Cyprus, Belgium and elsewhere to the main event in Rotterdam. The film brilliantly captures the lives of these kids, and shows, if nothing else, that ten-year-olds have as much angst as teens. Johnson edits it all together with a great comic touch. The lightness with which Eurovision is put into the context of Europe’s militaristic history is particularly fun.

Identities (dir. Vittoria Colonna) – Colonna’s aesthetic black-and-white documentary is a portrait of the multicultural transgender community in Ireland. It profiles five different people on various grades of the sliding inter-gender scale. An artistic sequence precedes or interrupts each profile, giving a surrealistic insight into the sub-conscious of each subject. But as three of the subjects are also cabaret artists, we are also treated to an excerpt from their stage show. Unsurprisingly, the most interesting subjects are those who are not professional performers – particularly the ageing transvestite science fiction author who remains a devout Catholic and writes earnest, troubled letters to the Pope.

The Hide (dir. Marek Losey) – This debut movie, based on a two-man stage play, is one of those absorbing, pared-down character-driven stories in which actors show what they can really do. An increasingly murderous scenario is played out on only one set – a bird-watching hut, filled with worn out almanacs, faded ornithological charts and Tupperware sandwich boxes, surrounded by bleak British mud-flats. This leaves the whole length of the film for the two actors to fill out the darkest corners of their characters. And as the tense dialogue unfolds, we discover plenty of those. Expect twists.

No Greater Love (dir. Michael Whyte) – This perfectly pitched documentary records life in a Carmelite convent in the Notting Hill area of London. But it could be anywhere since we never see the nuns leave its high walls. Instead we see them engaged in their eternal rituals of prayer, contemplation, gardening and the endless work of cleaning the building. We also watch them ordering groceries on the internet, sewing, and line-dancing. They are relieved of their vows of silence for some extremely interesting interviews that will debunk your preconceptions of a spiritual life.

The Contemporary Unspeakable: Three Films by Vivienne Dick – A very special guest at this year’s Britspotting, Vivienne Dick is an Irish experimental film-maker who found her way to New York in the 1970s. The three short films shown here reflect the unrestrained artistic spirit of that city in that hedonistic decade. Included in the short series are “Visibility Moderate,” a confused and out-of-place American tourist takes a part-fictional, part-documentary picaresque journey to Ireland, and “Guerillere Talks,” a series of short portraits of lost and lonely women in lower Manhattan.

Colin (dir. Marc Price) – With a micro-budget, though probably not as micro as the hyped-up £45, this horror film has a mundane feel to it that makes it even more depressingly and realistically English than “Shaun of the Dead” and “28 Days Later.” It’s a zombie film with an interesting take – the hero’s a member of the undead – and it has all the intestines, flaps of skin, and improvised blunt weapons that horror fans need. It also concentrates on the emotional journey of the undead a lot more than George Romero might have had in mind.

All films are being shown in Babylon Mitte (Rosa-Luxemburg-Straße 30), while the Filmcafé (Schliemannstraße 15) is hosting this year’s short film programme.