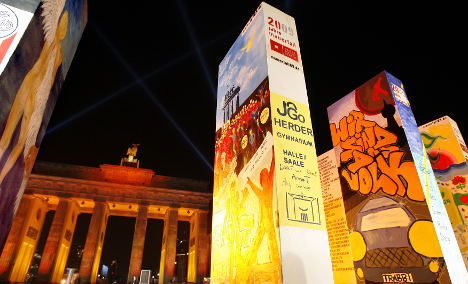 The Brandenburg Gate then

The Brandenburg Gate, long a Berlin landmark, took on a rather different symbolism with the fortification of the East-West border in 1961. The Wall was built right up to the gate, making Pariser Platz part of the border strip, just inside the Soviet zone.

On August 13, 1961, troops blocked access to the West through the gate. After that, the border was progressively fortified, leaving two walls, lights, watchtowers and even three-metre thick anti-tank defences in front of the gate itself.

A symbol of modern Germany, the Brandenburg Gate and Parisier Platz in front of it are now a top tourist attraction. Actors dressed as border guards even stamp passports and pose for photographs.

“I do like it as a sight, especially at night when there are only a few tourists. During the day it looks so small next to all the tourists and sightseeing buses. I think it would be better to think about it as a symbol of the reunification of Germany, rather than commemorating it with play acting,” Caroline Schuon, 21, a student from Münchberg, Bavaria, told The Local.

The Brandenburg Gate is also the focal point of 20th anniversary celebrations. Chancellor Angela Merkel and visiting dignitaries will kick off a party expected to attract over 100,000 people remember November 9, 1989.

On a more sombre note, it is still possible to find traces of remembrance for the victims of divided Berlin in the nearby memorial for victims of communism.