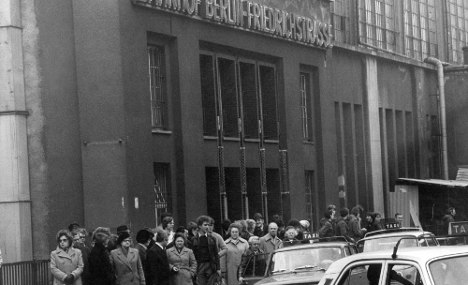 With the border established between East and West Berlin, the Friedrichstrasse station became the last S-Bahn commuter train stop. It was used as a crossing point from August 1961 for travel in both directions.

The station was located in the Soviet sector of the city when it was divided up after the Second World War, but it was also a stop for some trains that could be boarded only in the West, making it an important transit point.

The border crossing at the station became famous across Berlin as sad place. The building used for border clearance into the West at the station gained the evocative nickname “Palace of Tears,” because of the many painful goodbyes said as friends, family and visitors left people behind in the East.

Those crossing at this point, as at all others, underwent a series of strict controls – three passport checks, customs and even strip searches. They then entered underground walkways to platforms where they boarded trains to the other side.

Reverend Canon Thomas Williamson, an Anglican vicar from England who visited East Berlin with his wife as part of a village exchange to Germany in 1981, told The Local of their experience at the Friedrichstrasse checkpoint.

“When we crossed the border, we were all told not to smile or laugh at all, and to hide any cameras from the guards’ view. Our German group leader, Herbert, was taken away by the guards, strip searched and interrogated for a full 45 minutes. He told us this was routine for him,” Williamson said.

“As we left the East, after visiting the only seminary there, our hosts followed us to the station. They stood at the top of the steps as we went down, crying and holding out their arms to us as if they didn’t want to let us go,” he added.

Very little of the old checkpoint structure remains at the station, apart from the “Palace of Tears.” After German reunification the building was used as an arts centre and disco, but this was closed recently.

“It is due to become a museum, opening next year, with an exhibition on the history of the place, as part of the general concept of memorial for the Berlin Wall,” said Dr Axel Klausmeier, director of the Berlin Wall memorial foundation.