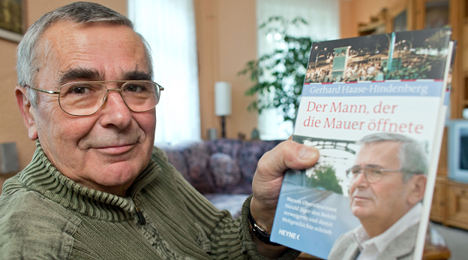 “But then things happened, that I would have never imagined even in my worst dreams,” remembered the former state security officer in a conversation with the DPA new service. His border crossing was the first to open – without an order from above. The hours leading up to the opening were the most dramatic in his life.

“I’m happy that only thing that flowed was fear-induced sweat and not blood,” Jäger said.

In the canteen around 7 pm that evening, he had followed the press conference with the East German official Günter Schabowski, which outlined new travel rules for the country’s citizens. Almost offhandedly, Schabowski announced the immediate opening of the border. The impact of the announcement was almost immediately visible, said Jäger.

“At first there were just a handful of East German citizens there, but by the minute there were more. It went from hundreds to thousands, who chanted, ‘Open the gate!,’” explained Jäger, who was in charge of 30 guards and three border posts that night.

“We stood just an arms-length away from the masses, who were separated from us by just a closed crossing gate,” he said, explaining how he was scared of a mass panic. “We no longer had the situation under control,” said Jäger, now 66 years old. He kept trying to phone his superiors for orders. “But higher up, chaos reigned just as it did for us.”

Around 9:40 pm, the order came to allow especially “provocative citizens” through the border, but not to let them back in. But this “ventilation” tactic didn’t help.

“At 11:20 pm, I then ordered the crossing gate to be opened and to allow everyone to leave without inspecting their papers,” said Jäger. About 25,000 people used their new freedom on that evening to cross into West Berlin.

“In the first moment, something was really empty inside me. I didn’t understand the world anymore,” said Jäger. Today, he’s “a bit proud” that he prevented the situation from escalating. He believes that because of his cool-headed handling of the situation, he made some amends for his 28 years of service with the East German border troops.

It was good that “the East Germans didn’t exclude us, instead they embraced us,” said Jäger. The reaction from his then-superiors was also mild. “My knees were shaking when I called up my colonel to report on what was happening. He said only, ‘it’s good, my boy.’”

After Germany reunited, Jäger had to “start from zero.” He was unemployed for two years and then trained to become a taxi driver. He also sold ice cream and newspapers and worked as a security guard. Coming to terms with his past took many years, Jäger said. A series of interviews with Gerhard Hasse-Hindenberg, who wrote a biography of Jäger that was published in 2007, helped considerably.

Today, Jäger lives in the town of Weneuchen in Brandenburg and spends a lot of time in his garden tending cacti. After 20 years, he wants to go back to his former border crossing on the 9th of November and mix with the others there.

But he can’t fully savour the freedom to travel that came with the fall of the Wall: he doesn’t have enough money for the dream trip to Mexico that he’d like to take.