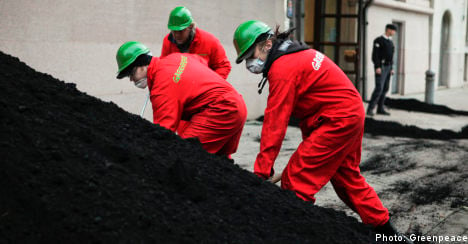 Swedish energy group Vattenfall has no coal plants in Sweden but has acquired 12 such plants in Germany, Poland, the Netherlands and Denmark in the past nine years, Greenpeace said in a statement.

“He should be going to the EU summit (on Thursday) and saying ‘I have instructed my energy company Vattenfall, the fifth largest in Europe, to switch to renewables.’ That is climate leadership,” she said.

The organization told Swedish daily Dagens Nyheter (DN) in its online edition that it brought the 18 tonnes of coal by truck from Germany, representing the amount Vattenfall burns every 20 seconds at its Jänschwalde plant there.

The group of 30 or so activists unfurled a green banner on the facade of the building reading “Reinfeldt Stop Sweden’s Coal Plants”, and formed a ring around the entrance to the building.

“Right now there is a fatal deadlock in the international climate talks … If the head of the EU Fredrik Reinfeldt tells the world that he has instructed his state-owned energy company to stop investing in coal plants, that could help break the deadlock,” Greenpeace said.