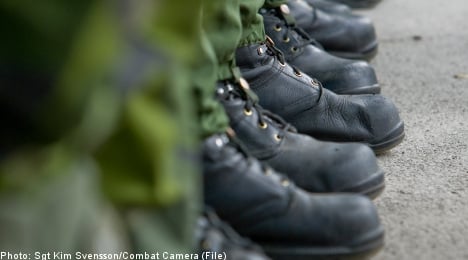 According to a report filed by Captain Bengt Nitz of the Amf 1 amphibious regiment, based in Hårsfjärden outside of Stockholm, the boots issued to the unit’s soldiers were of such poor quality that one commander considered ordering soldiers under his command to refrain from participating in training assessments.

“The soldiers’ boots lacked soles and in some cases had been previously issued to other soldiers up to eight times,” Nitz writes in his report.

Furthermore, the regiment is so short on uniforms that soldiers are forced to continue wearing their only set of military clothing for days on end without washing them.

One commander fears the practice of forcing conscripts to wear dirty uniforms will lead to an increased risk for diseases such as impetigo, a contagious skin infection common in school children which can result in blisters and scabs.

In order to protect his soldiers from infection, the Swedish commander has “encouraged his soldiers to take their uniforms home over the weekend and wash them at home”, according to Nitz.

In addition to clothing shortages, the regiment has also had a hard time getting much-needed night-vision equipment and weapon accessories.

Nitz has now voiced his concerns to officials at military headquarters, warning that the lack of equipment could have serious consequences for the morale of troops in his regiment and the military’s ability to hold on to new recruits.

“Better boots and two sets of uniforms are a must to be able to carry out quality training of soldiers,” he writes.

“Participation in exercises and the fulfillment of the goals of our training are set in opposition to our soldiers’ physical health. In addition, the inferior equipment sends a message to the soldiers – the exact same soldiers we’re hoping to recruit to serve in the future with the Armed Forces.”

According to Nina Enocsson with the Swedish Conscription Council (Värnpliktsrådet), equipment problems aren’t isolated to the Amf 1 regiment, but have occurred at military units across the country.

She blames military leadership for failing to pay attention to the needs of conscripted soldiers.

“The Armed Forces give priority to overseas units and overlook the conscripts, it’s just easy to blow them off,” she told the Svenska Dagbladet (SvD) newspaper.