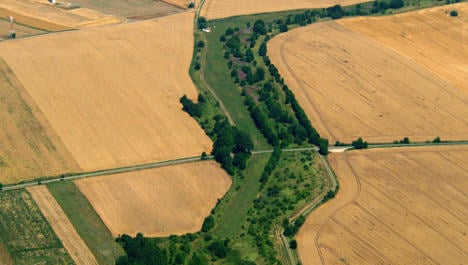 As a child growing up in a tiny village near Coburg in northern Bavaria, Kai Frobel could easily see the Iron Curtain from his bedroom window. He would spend hours staring across the barbed wire, just 600 metres away, even using his father’s binoculars to get a better view.

He could easily see the East German soldiers patrolling the border, but Frobel wasn’t interested in them – he was a bird watcher.

“The fields around the house were intensively farmed. If you were interested in biology like I was when I was 14, you ended up looking at the border because it was filled with an impressive range of species – and that was the only place they were. I could hear the birdsong,” he told The Local. “I would listen to the whinchats, they used the tops of the fence as their singing posts.”

The heavily fortified Cold War barrier was both a winding border and a death strip built to separate communist East Germany from democratic West Germany. But it was also, unwittingly, a haven for wildlife, as keeping people out of the area allowed nature to flourish.

Click here for a photo gallery of the Green Band.

Frobel and some like-minded friends began a survey in 1975, to see what species were there, and how many. The idea took off, and between 1979 and 1984 he and other twitchers counted birds along and in a long stretch of the Bavaria border strip – he says they covered around 1,000 square kilometres, watching and listening to the birds. That showed what a precious and unique area the border was, and the information was disseminated in newspapers and specialist journals.

“At first it was really just a nature-loving thing we were doing, and we realised that no-one from the east could get close enough to the border to realise what was there,” said Frobel.

“Then it became political within Bavaria – it was a shameful situation when the countryside was so bad that wildlife could only survive on the death strip.”

The potential was recognised as early as 1988, when Professor Heinz Sielmann made a nature documentary film on the western side of the border and made a remarkably prescient comment.

“If you think about the history of this border through the centre of Germany, one can barely take anything positive from it. But perhaps it offers us conservationists a chance,” he said at the time.

“As we have seen, there remain still-intact habitats, refuges of nature, with a rich animal and plant life in the shadow of the border – a seductive aim for a join conservation project of east and west.”

As soon as the Berlin Wall fell in late 1989, Frobel and others from the west contacted conservationists in the east and arranged a meeting in Hof to try to protect the unique habitat of the death strip.

Despite being the products of their respective political and social systems, the conservationists from different sides of the now defunct Iron Curtain immediately spoke a common language.

“That meeting was absolutely positive. The eastern conservationists trusted us – we all had very similar basic values,” Frobel said. “It was a very moving atmosphere.”

The 400 or so people at the meeting produced a resolution on December 9, 1989, calling for both German governments to act to protect what they, for the first time, called the Grünes Band – the Green Belt.

The first major piece of work to be done was to conduct a survey of the whole border – stretching along 1,393 kilometres, and between 30 metres and a kilometre wide.

“We published an audit for the first time in 2001 – it had taken more than ten years to do but we had a good idea of what we had,” Liana Geidezis, project director for the Green Belt at environmental group BUND (German Friends of the Earth), told The Local. “That 85 percent of the area was still there and intact. Then we really knew what we had – what we had to protect and where we had to try to recoup what had been lost.”

In the two decades since that first Green Belt meeting, BUND has managed to get much of it officially protected, despite some often very complicated land ownership issues. But it is important to try to keep the protected land without gaps so that animals, insects and plants are not isolated in little islands of wilderness.

Road building and pollution remain threats, while vigilance is necessary to try to prevent further gaps being made by land being sold or reclaimed and cultivated.

Green Belt organisers also promote education about the nature and history of the strip of land which used to divide the country. A scattering of museums, memorials and guided walks can be found along the route. The tourism aspect has been tested in the Rhön area for the last two years, to great success.

“It was not simple,” said Geidezis. “We had to think about it very hard, because it had to fit with the conservation, and the point of that is to keep things as wild as possible. But it makes sense to get local people involved, and bringing in tourists makes the conservation measures pay off – literally – for local people.”

People come to cycle along the trial, or take guided tours, and stay in local accommodation, eating at local restaurants, giving a boost to the regional economy, in turn increasing support for the Green Belt.

The German part of the Green Band is the core of a European effort to link nature protection projects along the entire route of the Iron Curtain. Although the border between the two German states was more militarised than most, the Cold War division between east and west ran all the way through the continent, from Norway to the Balkans.

An initiative launched in 2003 is now working to link the various national efforts into a pan-European nature preserve project.