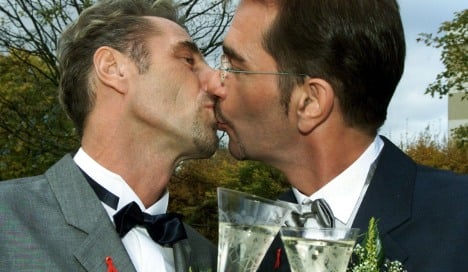 A failure to give gay partners the same benefits infringes the basic right to equal treatment, the Constitutional Court in Karlsruhe said.

The decision nullified an earlier ruling from the Federal Court of Justice (BGH) regarding a Hamburg man who has been a public servant since 1991 with a supplementary pension. The public-sector pension company VBL – the largest such company in the nation – refused to give the man married status, despite the fact that he’d been living in a registered civil union for eight years. This meant that his retirement benefits would be €74 less each month, and his partner would receive no surviving dependants’ pension in the event of his death.

But constitutional law forbids privileging one group above another, the court found. VBL is now required to adjust its benefits.

“I see this as a very big step for the equality of homosexual marriage not only for employee pensions, but in many other areas too,” the Hamburg man’s lawyer Dirk Siegfried said.

The legal protection of marriage and family can no longer be used to discriminate against homosexual couples, Beck added, calling the ruling a “clear defeat for the conservative ideologists” in among Chancellor Angela Merkel’s Christian Democratic Union.

He also encouraged the German government to give homosexual couples equal treatment in tax law.