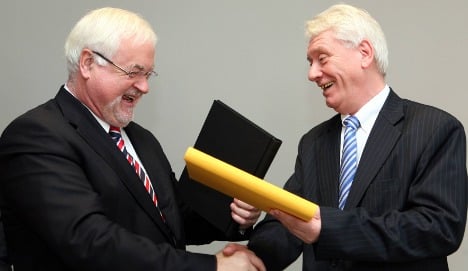 Minister President Harry Carstensen of the CDU spoke of having created a coalition of change as he signed the agreement with FDP state head Jürgen Koppelin in Kiel.

The CDU got its worse return for 60 years in the northern state during the election, held at the same time as the federal parliamentary vote last month. But its 31.5 percent will combine with the FDP’s 14.9 percent to give them a majority of seats in the state legislature.

Carstensen had forced the election with the collapse of his previous coalition with the Social Democratic Party (SPD). Now he will lead with a very slim majority of just three seats, but he has said he is happier with a narrow margin with a co-operative coalition partner after the acrimonious time with the SPD.

One of the points already agreed upon is to cut 10 percent of the around 56,000 civil service jobs in the state by 2020 in order to reduce the budget deficit.