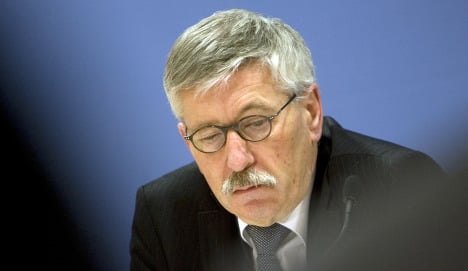 Der Spiegel reported this weekend that the communication team had suggested Sarrazin do the interview with the culture magazine Lettre International, which took place in the Berlin office of the Bundesbank.

As is frequently the case in Germany, the magazine submitted its version of the interview for approval before publication. A number of changes were suggested by the head of communications, which Sarrazin accepted, and the approved text was sent to the magazine for publication.

Der Spiegel said that Weber also read the text before it was published, but only protested after it was too late to stop it being distributed.

Sarrazin, who was Berlin’s city finance senator before he joined the Bundesbank, said in the interview, “a great many Arabs and Turks [in Berlin], whose numbers have grown because of the wrong policies, have no productive function other than as fruit and vegetable sellers.”

He also said Berliners had neither the intellect nor the talent to make the capital a great city, and that the city was hampered by the fact that “40 percent of all births take place in the lower class.”

Weber has distanced himself and the bank from the comments, and last week Sarrazin was stripped of a number of responsibilities, although he remains on the board.