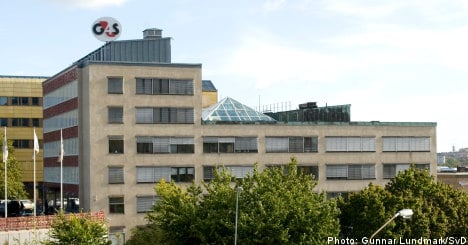 Serbian police told the Aftonbladet newspaper they aware of plans to rob the Västberga cash depot and alerted Swedish police that a coup was imminent.

“We gave them everything that was needed to stop the robbery,” Serbian Chief of Police, Milorad Veljovic, told the newspaper.

“We really did everything in our power short of going to Sweden and stopping the robbery ourselves.”

A police source confirmed for TT that Swedish police had received a tip regarding the planned robbery from the Serbian police, but rejected the assumption that they had neglected the information.

According to the information provided, the robbery was due to take place a week earlier. At that time Swedish police were closely monitoring the robbers in an operation referred to as KKP 4.

The operation entailed monitoring a number of different cash depots and temporarily moving police helicopters from the police heliport at Myttinge on Värmdo to another location.

“But because nothing happened, the operation was called off. Then it happened anyway, only later on,” the source said.

Police helicopters at the Myttinge heliport were subsequently unable to respond when the robbery took place on Wednesday morning of last week because of fake bomb had been placed near the hangar.

On Sunday, Swedish police took a total of six people into custody for their suspected involvement the robbery.

All are suspected of aggravated robbery for their role in the Hollywood-style robbery at the G4S cash depot in Västberga south of Stockholm early Wednesday morning.

A 21-year-old man from Bagarmossen has also been taken into custody on suspicions of being an accessory to grand robbery, according to documents submitted to the Södertorn District Court.

The 34-year-old suspect is a former student of Roslagen Helikopterflyg, a Swedish helicopter training academy in Norrtälje, north of Stockholm.

“He completed his education here around fifteen years ago, but he has never worked for us,” said head instructor Christer Öhlund to the TT news agency.

According to Öhlund, the 34-year-old only attained a private flying certificate. He does not have certification to fly as a professional pilot.

The man has had regular contact with the training academy, routinely hiring a helicopter for private flights. The last time he did so was in summer of this year.

According to flight instructor, the school was planning to hire the suspect as a photographer for the company, but the plans were never carried out.

Öhlund was shocked to discover that the man was being held on suspicions of involvement in the robbery.

“I don’t think he’s guilty. I can’t imagine that he could have done this. He’s just too nice and personable to have carried out such a thing,” he said.

Attorney Leif Silbersky is defending the 34-year-old and hinted at how his client was feeling following his arrest.

“A person never feels good when they are arrested and consider themselves to be completely innocent,” he said.

Interrogations have been held for the suspects, according to the National Police Board (Rikspolisstyrelsen).

The Swedish police remain tight-lipped regarding any additional information, and refuse to reveal whether the suspect knew one another before the robbery was carried out.

District prosecutor Leif Görts is due to announce on Wednesday at noon whether he plans to request that the suspects be remanded in custody.