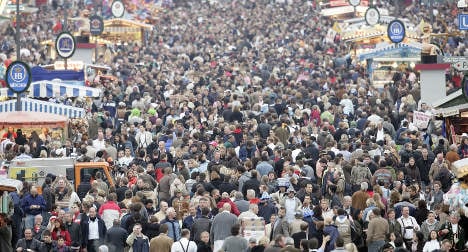 Amid growing security fears after repeated internet warnings from al Qaida and the Taliban of possible terrorist attacks in Germany, the Federal Ministry of Transport ordered a ban on planes flying over the festival at the request of Bavaria’s Interior Minister Joachim Herrmann.

“Due to the current security situation, a no-fly zone seems to us to be necessary,” Mr Herrmann said.

The order will stand until Oktoberfest ends on October 4. At least 6 million beer-drinking revellers are expected to attend the festival.

Authorities decided to act after four separate videos were posted online by al Qaida and one by the Taliban, threatening Germans with terrorist attacks unless they elected a government on Sunday that would withdraw the nation’s troops from Afghanistan.

Countless Oktoberfest party-goers got a fright on Thursday when a promotional plane flew low over the heads of the crowds.