TeliaSonera already which already owns 61 percent of the company.

“The Estonian government decided at its Thursday session to sell all the shares the state has in Eesti Telekom” for some four billion kroons ($378 million), cabinet spokesperson Liina Lepik told AFP.

At the end of August, Swedish-Finnish telecoms group TeliaSonera made a 5.1 billion kroon bid for the remainder of Eesti Telekom.

The remaining 12 percent of the company is held by private shareholders.

TeliaSonera – which holds assets across eastern Europe and Central Asia – first acquired a minority interest in Eesti Telekom in the early 1990s.

Estonia’s centre-right minority government has said the sale is crucial amid a deep economic crisis, but the opposition has blasted it, saying Eesti Telekom provided the state with a stable source of income.

Estonia, which shifted rapidly from a communist command economy to the free market after independence from the Soviet bloc in 1991, had enjoyed a reputation as a “tiger” in the European Union, which it joined in 2004.

But the country of 1.3 million people swung into a sharp recession in 2008 and its economy is forecast to shrink by 15.3 percent this year. 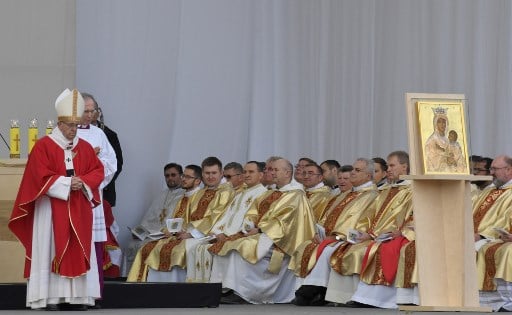 Pope Francis holds a mass in Estonia on the third day of his Baltic tour. Janek Skarzynski / AFP

“We know – and you have told us – that many young people do not turn to us for anything because they don't feel we have anything meaningful to say to them,” the pontiff said during a visit to Estonia.

“They are outraged by sexual and economic scandals that are not met with clear condemnation,” he added on his last day of a tour of the three Baltic countries.

Speaking to young Estonian Christians at a Lutheran church in Tallinn, the pope said many youths find the Church's presence “bothersome or even irritating”.

“We ourselves need to be converted. We have to realise that in order to stand by your side we need to change many situations that, in the end, put you off,” he added.

The Catholic Church has been rocked by a fresh wave of devastating claims of sexual abuse committed by clergy across the globe.

Scandals in Australia, Europe, and North and South America have involved widespread claims of abuse — and cover-ups — by clergymen and lay members with one Vatican archbishop describing it as the church's “own 9/11”.

Germany's Catholic Church on Tuesday released a damning report showing that in Germany alone, almost 3,700 minors were assaulted between 1946 and 2014.

'Love is not dead'

The pope himself has yet to respond to cover-up allegations levelled against him.

The now 88-year-old cardinal was accused of sexually abusing a 16-year-old boy half a century ago, a charge he denies.

But in an unprecedented move, Francis accepted his resignation as a cardinal in July.

In an interview broadcast Tuesday, Lithuanian President Dalia Grybauskaite came to the defence of the pope, whom she welcomed to her majority-Catholic Baltic country over the weekend.

Without naming sexual abuse scandals, Grybauskaite told public radio LRT that the pontiff carries a “huge cross for all those who made mistakes that need to be corrected”.

Ahead of his Baltic tour, the pope accepted the resignations of two more bishops from Chile, which is investigating more than 100 cases of sexual abuse by the clergy.

On Tuesday, the pontiff tried to reassure Estonia's young Christians.

“Love is not dead,” he said, rebutting the lyrics of a popular local song.

The pope was notably responding to the story of Lisbel, an 18-year-old Lutheran who spoke of finding comfort in religion after growing up with an unloving alcoholic father.

Many young people “see that their parents no longer love one another, that the love of newlyweds soon fades,” he said.

“They see a lack of love in the fact that nobody cares that they have to migrate to look for work.”

Adeele, an 18-year-old Lutheran, said she was “grateful” to the pope for the visit, adding that “he creates an atmosphere of understanding and respect”.

Like the country as a whole, many of the young people in attendance said they are not religious.

Thirteen-year-old Linda Pajula for example told AFP that she came to the meeting because “it seemed like a fun experience”.

She said the pope's speech “might have been difficult for me, but I did understand most things.”

An EU and NATO member, Estonia is a small Baltic country where a quarter of the population is ethnic Russian.

Sixteen percent of the population is Orthodox, 10 percent is Lutheran and only 6,000 residents are Catholics.

The majority of Estonians say they are resistant to religion.