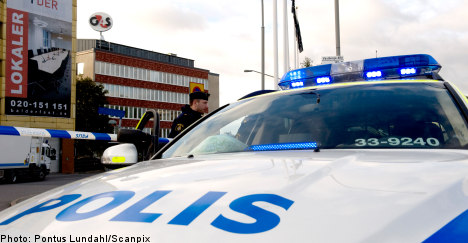 So far no one has been arrested for direct involvement in the daring pre-dawn raid.

The two people arrested on Wednesday afternoon during the initial phases of the investigation are suspected of receiving stolen goods in crimes unrelated to the heist.

One of the men was released late Wednesday night, while the other remains in police custody. He was wanted for having failed to serve out the entirely of a previous prison sentence.

Police estimate that there are no more than 25 career criminals in Sweden capable of carrying out such a unique and professionally-executed robbery.

Officially, police don’t want to publicize exact estimates of how many people may have participated in the stunning heist.

“But we’re probably talking about a figure in the two digits,” said Christian Agdur of the Stockholm police.

Police intelligence units are now working furiously to determine how many of Sweden’s most-capable criminals are currently out of prison, where they are, and whether or not there have been any rumours circulating in criminal networks about a major planned crime.

The possibility that the theft was an inside job is also being explored.

Police sources believe that one or several of the robbers likely had military training.

“The complicated logistics are comparable to something from the military. It’s not just anyone who can get themselves up and down in a helicopter like that. It requires something like infantry or operations training,” a police source told TT.

Meanwhile, police are facing criticism for the lax security at the Stockholm police heliport at Myttinge on Värmdö, a problem which has been known for at least a year.

The robbers were able to stay ahead of police in part by grounding police helicopters through placing a fake bomb in the entrance of the hangar.

Sten-Olov Hellberg, commissioner of the Dalarna County Police in central Sweden, submitted a report in June 2008 about police helicopter units around the country to the National Police Board (Rikspolisstyrelsen).

In the report, he criticized the security at Myttinge, the Dagens Nyheter (DN) newspaper reports.

“The helicopters are basically kept in a tent. As far as I can tell, the site isn’t manned around the clock,” he told DN.

He is highly critical of the security lapses, especially in light of a previous incident in which police helicopters had been shot at a hangar in Gothenburg.

The Stockholm police’s two helicopters are only at Myttinge on a temporary basis, according to Tommy Hydfors of the National Criminal Investigation Department (Rikskriminalpolisen).

Following a 2002 fire at the previous hangar in Tullinge south of Stockholm, police have been unable to find a new permanent location to house the helicopters.

As a result, the temporary facilities at Myttinge haven’t been outfitted with the tougher security measures police would want at a permanent facility.

He has proposed moving them again to the Berga naval base in the Stockholm archipelago, a site where the helicopters had been placed previously.

“I think it’s the best place for us and I assume that after we have a conversation with the Supreme Commander, we’ll be able to go back there,” said Svenson.