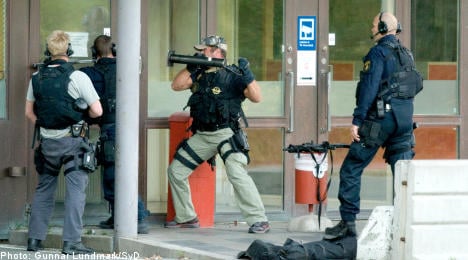 “One person has been arrested who may be of interest in the investigation,” said Christian Agdur of the Stockholm police during a Wednesday afternoon police conference, according to the Aftonbladet newspaper.

The man has not been formally named as a suspect, but remains in police custody pending the outcome of an interrogation.

The spectacular robbery, which took place early Wednesday morning and targeted a cash depot in Västberga, involved a stolen helicopter and fake bombs in a highly orchestrated caper.

“The robbery was well-organized, well-planned, and technically well-equipped. Taken together, it can lead to a number of possible hypotheses about who could have been involved,” said Agdur.

Shortly after 5am, a white helicopter hovered over the depot, several explosions were heard, and several masked men climbed down onto the roof of the building.

According to eye-witness accounts, several objects were then loaded up into the helicopter before it left the scene.

It was later found abandoned in a field north of Stockholm.

Some experts have theorized that at least one of the robbers may have had a military background. Others marveled at the skill displayed by the pilot of the helicopter, which had been stolen from a heliport north of Stockholm overnight.

“It was very professionally done. Not even a police of ambulance helicopter would land in that way,” said Anders Jansson of the Stockholm police.

A high ranking official who wished to remain anonymous told TT he suspects the crime was an inside job.

“The robbers must have had access to drawings and other detailed information about how they could get in and how they should orient themselves once inside the cash depot,” the source told TT.

Police continue to come up with a list of possible assailants of which there like isn’t “all that many” according to the source.

He wouldn’t rule out that the robbers may have had military training, “perhaps somewhere outside of Sweden”.

According to the source, the perpetrators were armed with “weapons bigger than usual”, which he hinted referred to a specific type of automatic weapon, although he refused to be more specific.

The G4S cash transport company which operated the depot said in a statement on its website that the robbers made off with “an unconfirmed sum of money”.

“We’re doing all we can to help the police with their investigation,” writes the company, promising “a large reward” for information which helps solve the crime.

Public prosecutor Leif Görtz of the international section of the Stockholm prosecutor’s office has been chosen to lead the preliminary investigation in the case.

“Just because I work in the international section doesn’t automatically mean that the crime has any international connections. We also deal with other cases involving serious organized crime,” he told the TT news agency.