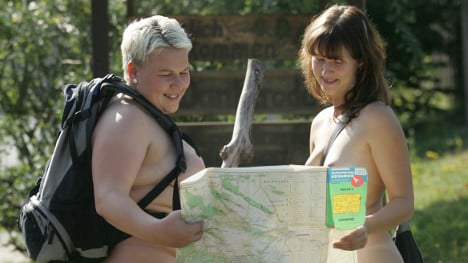 Foreigners are frequently shocked by the widespread nudity found in German parks and other public spaces, but even tolerant Teutons have their limits for the country’s Freikörperkultur (FKK), or literally “free body culture.” For example, most would disapprove of a group of girl scouts happening upon stark naked hikers while on a weekend camping trip.

Which is why Heinz Ludwig, an entrepreneur from the bucolic Harz region of Saxony-Anhalt, started an initiative to open the country’s first trail for hiking nude. Stretching 18 kilometres from the town of Dankerode to the Wippertal reservoir and back, it is intended to allow FKK aficionados to commune with nature while au naturel when it opens next May.

Click here for a photo gallery about the nudist trail with NAKED hikers.

Ludwig has started posting signs along the route warning more prudish nature lovers: “If you don’t want to see naked people you should not continue onward.”

The German media reported this week that hikers in the buff could already hit the trail, but Ludwig told the news agency DDP the path still needed to cleared of stinging nettles before the real nude fun could begin next spring.

“You have to be creative in order to survive,” said the restaurant camping grounds owner. “I expect it will spark interest far and wide and people will come here to eat, drink and sleep.”