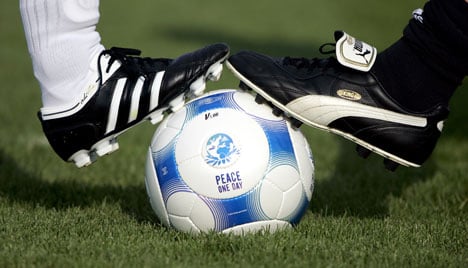 Adidas boss Herbert Hainer played up front for his team while Puma chief Jochen Zeitz played in goal, an Adidas spokeswoman said, as the two sides sought to heal a rift kicked off more than 60 years ago.

The two companies were formed after a spat in 1948 between Rudolf and Adolf (Adi) Dassler caused them to split up their familial business – once a provider of running shoes to legendary US sprinter Jesse Owens. The rivalry even divided the firms’ home town of 23,000 people in southern Germany, where Adidas and Puma have rival factories on opposite sides of the Aurach river.

But the bosses of both companies hoped the time-honoured tradition of a handshake and a game of football would heal wounds from the rift.

In the race for top German sportswear group, Adidas has generally won out though Puma recently signed a sponsorship with Jamaican sprinter Usain Bolt.

The match took place between workers from both companies within the framework of the “Peace One Day” initiative, an annual day of global ceasefire and non-violence.