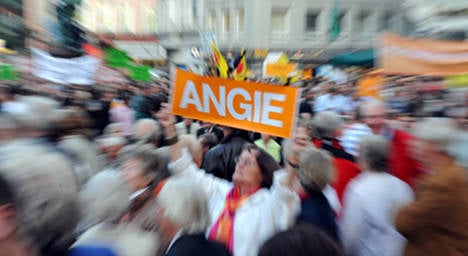 A supporter of Chancellor Angela Merkel at a Hamburg rally. Photo: DPA

At the event held in central Hamburg, a group of several dozen young people who organised on the Internet ironically shouted “Yeah!” after every one of Merkel’s pronouncements on German reunification and family policy.

According to the Web site, a user of the photo-sharing service Flickr posted a picture of the placard announcing Merkel’s rally online on September 11 and sent the link to friends on the Twitter short message network. The placard said, “The Chancellor is coming,” and underneath, the user wrote: “Yeah.”

Soon after, the invitation went viral on the Internet and was posted by a variety of German blogs.

Supporters of Merkel’s Christian Democratic Union watched the good-natured flash mob with dismay, but did not try to disrupt them, Der Spiegel reported.

Flash mobs have been popular in Germany for several years, though in recent months there have been attempts to limit them. The city of Braunschweig has tried to ban the mobs from gathering in front of the city’s palace for spontaneous picnics and dance-ins.

Though a few flags for the upstart Pirate Party were seen on the edges of the flash mob, the group did not appear to have a political purpose, preferring instead to play the role of jesters in what’s been a lifeless political season until now.

“It’s more about having fun,” one girl at the rally told Der Spiegel.

A half hour after Merkel finished her speech, the group sang the German national anthem, shouted “Yeah!” one more time and left.