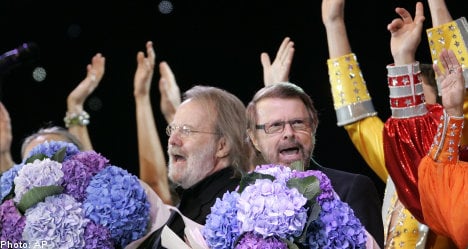 The performance, dubbed “Thank You for the Music: a celebration of the music of Abba” and broadcast live on the BBC, included appearances by original Abba-members Benny Andersson and Björn Ulvaeus, as well as a number of other high profile stars, including Kylie Minogue, Chaka Khan.

“That was a dream fulfilled,” Minogue told the crowd after her performance of Super Trouper and When All Is Said And Done, according to the TT news agency.

The concert was arranged by the BBC as a tribute to continuing influence of Abba’s music in England.

“Thank you for singing so beautifully,” Ulvaeus told the crowd, adding that he never could have imagined that the Abba’s 1974 Eurovision Song Contest victory would have led to such success.

The show concluded with songs featuring the full West End cast of the hit musical Mamma Mia!, which includes a soundtrack featuring a number of Abba favourites.

Abba songs hit the top of the UK singles charts nine times, and the band’s greatest hits album, Abba Gold, has sold nearly 5 million copies in Britain, remaining a top seller since its release in 1992.

“I think that English people thing we’re from England. They know all the lyrics, all the songs. It’s unbelievable,” said Andersson, who performed with his Swedish folk music band Orsa Spelmän.