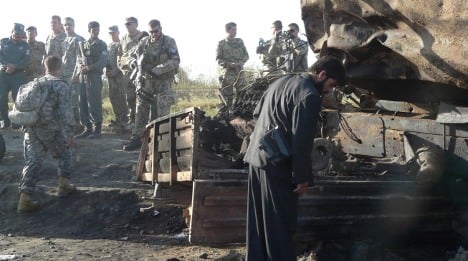 He added the government had not changed its assessment despite an Afghan inquiry that said 30 innocent people had died in the bombardment of two fuel trucks near Kunduz on September 4.

“If there were civilian victims it would be tragic and would have our deepest condolences and we would take care of these cases,” he said, but added Berlin would not comment on the findings by the investigation initiated by Afghan President Hamid Karzai.

That inquiry concluded over the weekend that 99 people, including 30 civilians, died in the air strike called by Bundeswehr Col. Georg Klein.

Raabe also said Gen. Wolfgang Schneiderhan, the Chief of Staff of the Bundeswehr, had flown to Afghanistan to gain his own impression of the incident. He is to meet with the head of the ISAF mission, US Gen. Stanley McCrystal.

The German government and military have faced immense pressure after Klein called in NATO air support to destroy the trucks taken by the Taliban near the Afghan city of Kunduz. Berlin at first contended that only Islamist insurgents had been killed in the air strike, but later said there had been an unspecified number of civilian victims.

NATO is still investigating the incident and Germany last week issued a round of formal diplomatic protests to fellow allies asking them to refrain from criticising the incident until the inquiry concludes.

Some 4,400 German troops are serving in Afghanistan as part of NATO’s International Security Assistance Force (ISAF).

Germany only began major military deployments abroad a decade ago, breaking a post-war taboo, and the air strike has moved what was already an unpopular mission up the agenda ahead of general elections in less than three weeks.

Both Merkel’s conservative Christian Democrats and her challenger Frank-Walter Steinmeier’s centre-left Social Democrats support Germany’s military engagement in Afghanistan, as do the opposition Free Democrats and Greens. Only the hard-line socialist party The Left demands the immediate withdrawal of German forces.