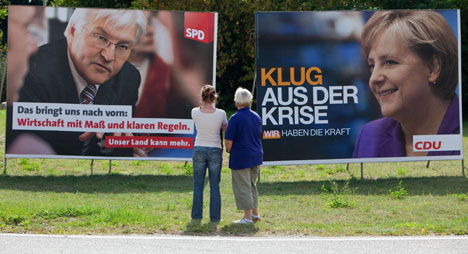 In Germany’s fourth ever TV election debate, the pair were due to spar for 90 minutes from 8:30 pm (1830 GMT), being grilled by four prominent journalists on a wide range of topics, including the economic crisis and the war in Afghanistan.

And with the clock ticking before Germany goes to the polls on September 27, the “TV duel” as it is dubbed here is viewed as the last opportunity to ignite an election campaign that has largely failed to inspire the public. The stakes are high: some 20 million Germans – around one third of voters – were expected to tune in, and 56 percent said in a recent survey the debate could have some influence on where they put their cross on election day.

Steinmeier, vice-chancellor and foreign minister in Germany’s uneasy grand coalition, still has a vast amount of ground to close, with recent polls putting his Social Democrats around 13 points behind Merkel’s conservatives. Analysts say Merkel is almost certain to win a second term in power and Steinmeier is fighting to keep his party in government.

“This evening is all or nothing for Steinmeier. If he doesn’t start to launch his fightback in the TV studio … then he’s failed,” the mass-circulation Bild am Sonntag said in an editorial. The paper cited a poll showing that 40 percent of the electorate is still undecided, meaning Steinmeier has plenty to play for.

However, those looking for fireworks between the two might be disappointed.

Both politicians are cautious and understated by nature and find it difficult to attack each other’s record as they have been coalition partners for the past four years. And both have played down expectations that the gloves will finally come off on Sunday, with Steinmeier saying: “The TV duel is not about our fighting styles.”

The cosy nature of the debate has infuriated Guido Westerwelle, leader of Merkel’s preferred coalition partner, the pro-business Free Democrats. Calling his own exclusion from the debate “unacceptable, undemocratic and unfair”, Westerwelle said it would likely come across as a “televised cabinet meeting.”

“Mrs. Merkel is going to say: ‘Frank-Walter, it hasn’t been all that bad’ and Frank-Walter will reply: ‘Angela, you’re right,” he told the Handelsblatt business daily.

Claus Leggewie from the Institute for Advanced Study in the Humanities in the western city of Essen also warned that few sparks were likely to fly. “Here come two people from the same government to tell us how it all went – not very exciting,” he told the WAZ daily.

Media expert Hans-Hermann Tiedje said people would tune in “out of pure desperation.”

“I would rather go and see Knut. That would be more informative,” he told the Tagesspiegel daily, referring to the Berlin zoo polar bear cub who shot to global fame in 2007.

Polls after the debate before the last election in 2005 showed then incumbent Gerhard Schröder – dubbed the “media chancellor” for his telegenic style — trounced Merkel but failed to gain a boost as she beat expectations. But after four years of seeing their assured chancellor impressing on the world stage, expectations are higher this time around for Merkel’s performance.

Nearly two-thirds of Germans (64 percent) believe Merkel will “win” Sunday’s debate, compared to only 15 percent who think Steinmeier will triumph, according to a poll for ARD public television.

Germans turned off by their insipid election campaign at least have a choice in the rotund shape of Homer Simpson.

While the debate is being carried live on four major channels, a rival station is showing “The Simpsons – The Movie,” and has plastered Berlin with ads saying “Vote Simpsons”.