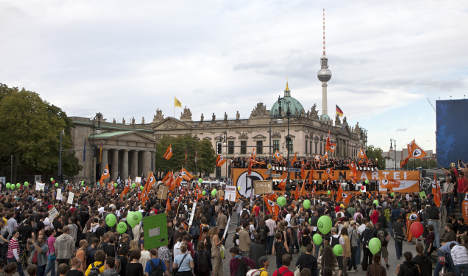 Organisers of the demonstration, under the motto “Freedom rather than fear – stop the surveillance madness,” said it was a success and should serve to show politicians how many people care about their privacy.

A coalition of 167 organisations – including political parties, trade unions, professional associations, capitalism critics Attac, and the Chaos Computer Club – had called on people to demonstrate against laws enabling some internet sites to be closed down and data to be held for no immediate reason.

Head of the service industry trade union Verdi Frank Bsirske said at the rally that surveillance and spying had become reality for many workers because state, industry and employment world had become obsessed with control.

He named recent scandals at Lidl, Schlecker, Deutsche Telekom and Deutsche Bahn, where he said it had been demonstrated that in some upper echelons of business, there was no longer any sense of right and wrong.

State data protection representative from the state of Schleswig-Holstein, Thilo Weichert, told the crowd that the authorities must act more professionally when pursuing criminals using the internet.

“The population needs freedom of information and opinion, not total control,” he said.

The demonstration was set to be part of a series held around the world.