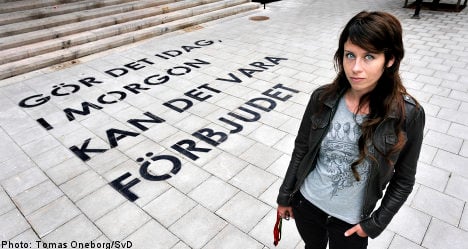 What is art? What is sanity? How are the mentally ill really treated by contemporary health care professionals? These are just a few of the poignant questions which remain wholly untouched by Anna Odell’s ‘Unkown, woman 2009-349701.’

For a piece that has generated more controversy than any other project by a Swedish art school student, the work seems to have had very little to do with art and everything to do with the artist herself.

After faking an episode of psychosis for the purposes of an art installation, the exhibition of Odell’s work by the University College of Arts, Crafts and Design (and her subsequent conviction on charges of false alarm, violent resistance and fraudulent practice) have generated a plethora of divided, yet invariably hot-blooded responses. As the media frenzy begins to draw its gasping (and perhaps long overdue) final breath, it is worth taking a last glance at what—if anything—Odell’s piece actually accomplished.

Works that serve to interrogate the idea of ‘art’ or of ‘reality’ through the provocation of the viewer are of course nothing new. In 1917 Michel Duchamp incensed the art world by submitting a urinal to the Society of Independent Artists exhibit and naming it Fountain. In 1928, surrealist René Magritte inscribed a painting of a pipe with the words Ceci n’est pas une pipe (‘This is not a pipe’) in order to question the nature of representation and of accepted reality.

Unlike her predecessors in the art world, however, Odell has done very little to efface herself in favour of the work itself and what she claims to have been its overarching concern. Nor does she seem to have a very clear idea of what that concern actually is.

An artist is under no obligation to articulate the meaning of their work and may choose to leave that elusive question hanging for the viewer to draw whatever conclusions they will from their own observations. Odell has, however, chosen to defend herself and her work in numerous press interviews through a series of seemingly poorly thought out and essentially vague assertions: in one interview she mentions the philanthropic desire to ‘open up discussion about psychiatry in Sweden’.

Other motivations are more inherently narcissistic: to shed her role as a ‘victim’ of mental illness, to prove that she was not lying when she informed people of her past experiences as a psychiatric patient, that she was in fact forcefully restrained and medicated against her will.

All of these desires (though perhaps understandable) fall into the related categories of being redundant (yes, if you scream, spit in the face of those trying to assist you, and threaten to throw yourself off a bridge you may reasonably expect to be straitjacketed and sedated), poorly thought out (how exactly does faking a psychotic episode reverse the dynamic of power between you and the great abstract demon of ‘psychiatry’?), or wholly unrelated to the work that was in fact produced.

The footage of Odell on Liljeholms bridge that January evening shows police officers utilising no greater force than was necessary to restrain an incoherent woman who seemed to pose an immediate danger to herself and a potential danger to passers by.

The fact is that the footage shown in ‘Unknown, Woman’ is not half as significant as what was not and could not be shown: the efforts of the doctors and nurses of the St. Göran psychiatric clinic to restrain a screaming woman, the faces that Odell, in an effort to complete her illusion, so unceremoniously (and quite literally) spat in. Also not depicted were the other acutely ill patients who waited for treatment through the hours that Odell manifested her faux psychosis.

Does the fact that the artist once suffered a mental breakdown give her license, not only to delay the treatment of these patients, but to effectively impersonate their suffering? There is certainly something inherently repugnant in the action, while, to my mind, what the health care professionals of St Göran’s hospital went through that night on her behalf constitutes a direct violation. Every day, these individuals face the kinds of challenges (in the words of one orderly, the experience of having to restrain another human being is ‘excruciating’) of which an art student remains blissfully unaware.

Inevitably, the nature of the piece (not to mention Odell’s extensive engagement with the media) has muddied the distinction between art object and its creator to such a degree that any artistic value it might have had (and this is debatable) has been entirely overshadowed by the artist’s own agenda.

In an interview with newspaper Svenska Dagbladet, Odell credits the media attention she has received with giving her ‘a chance’ as an artist, for offering her ‘the possibility of a career.’ While I’m sure the staff and patients of St Göran’s would be delighted to hear of their role in providing the artist with her ‘big break’, I’m not sure that the price paid justifies the underwhelming end product. Due to the extremely limited footage of what actually took place that evening, the work also fails as a piece of social commentary or documentary: there is simply not enough material to generate any informed debate about the state of treatment of the mentally ill in Sweden.

In short: might there be problems with Swedish psychiatric care? Absolutely. But those seeking to investigate the issue further would be better advised to turn to SVT’s 2008 documentary ‘Berny Blue’, a harrowing inside glimpse at the life of young Swedish writer, Berny Pålsson, plagued by drug addiction and an undiagnosed psychological disorder closely resembling schizophrenia. Though the piece failed to generate anywhere near the amount of media sensationalism that Odell herself has enjoyed, the suffering it depicts as a young woman plunges into the depths of a psychotic attack (with little to no help from the professionals to whom she reaches out) is not for the sake of art.