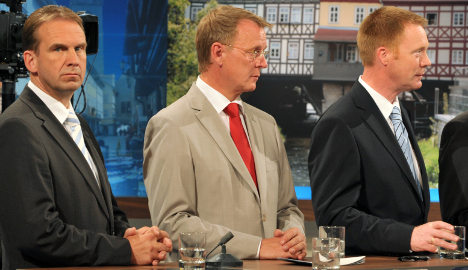 And the next premier of Thuringia will be.... Photo: DPA

While Chancellor Angela Merkel’s conservative Christian Democrats (CDU) appeared set to form a coalition with the pro-business Free Democrats (FDP) in Saxony, the political destinies of the other two states that also voted on Sunday remained unclear as left-wing parties sparred over how to oust the conservatives from power.

Christoph Matschie, the head of the centre-left Social Democrats (SPD) in Thuringia, reiterated his party would not vote to make a member of the hard-line socialist party The Left state’s premier, calling such a move “irresponsible.”

But The Left said it would not break with political convention by allowing an SPD premier, since the Social Democrats won considerably fewer votes in the state poll.

“That will not happen with us,” said Dietmar Bartsch, The Left’s general secretary.

The left-wing standoff could allow Thuringia’s battered conservative premier, Dieter Althaus, to remain in office if the CDU can convince the SPD to join a grand coalition government.

The conservatives suffered heavy losses in Thuringia on Sunday and were equally battered in the western state of Saarland. There, the CDU-led government could also be replaced by a left-wing alliance between the SPD, The Left and the Greens.

Saarland SPD leader Heiko Maas announced Tuesday he was inviting The Left and the Greens to preliminary discussions aimed at determining the feasibility of forming a coalition. But the state’s incumbent premier, Peter Müller from the CDU, said he hoped to convince the Greens to join an alliance with the FDP to keep the conservatives in power.

Members of both the Social Democrats and The Left party on Tuesday asked the left-wing political rivals to cooperate more closely, calling an eventual rapprochement at the national level inevitable.

“If a left-wing alliance was forged in Saarland it would help eliminate hurdles at the federal level,” SPD member Ottmar Schreiner told the Bild newspaper.

The Left party’s deputy chairman Klaus Ernst also said he could see the two parties cooperating at the national level at some point, but not after the election on September 27.

“Maybe not immediately, it could take one or two years, but then something will happen and there will be possibilities,” Ernst told public broadcaster Bayerischer Rundfunk.