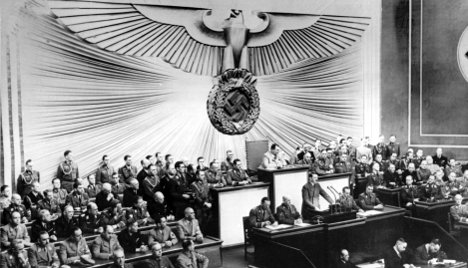 “Germany attacked Poland, Germany started World War II. We caused unending suffering in the world. Sixty million dead … was the result,” Merkel said on German television on the 70th anniversary of the start of the war.

“But the expulsion of well over 12 million people from areas of the former Germany and present-day Poland is of course an injustice. This must also be recognised,” she said.

Merkel, who was born in 1954, later travelled to give a speech at commemorations in Poland marking the start of the war with other leaders.

“The war unleashed by Germany resulted in immeasurable suffering to many peoples – years of deprivation of rights, of humiliation and destruction,” she said at Westerplatte, the site of a Polish base that saw the first battle with Nazi German troops in the early hours of September 1, 1939.

“No country suffered from German occupation as much as Poland…. Here at the Westerplatte, as German chancellor, I commemorate all the Poles who suffered unspeakably from the crimes of the German occupying forces.”

“The horrors of the 20th century culminated with the Holocaust, the systematic persecution and murder of European Jewry,” Merkel said. Half of them were Polish Jews.

In her weekly webcast at the weekend, Merkel had said that it was a “sign of reconciliation” that she had been invited by Polish Prime Minister Donald Tusk to take part in memorial events at Westerplatte, a peninsula on the edge of Gdansk – known as the Free City of Danzig as the war started.

“Today we will come together not as enemies but as political partners and friends. And it is this which fills me as German chancellor with particular gratitude,” Merkel said.

“Today we are all unified in the European Union and in the NATO Western alliance. We work together as partners and as friends, we work for human rights throughout the world and so that terrorism can be tackled together,” Merkel said.

“As a result, September 1 is of course a sad day – a sad day for the suffering and also remembrance of Germany’s guilt from starting World War II. But it is also a day for thanks and of confidence that today we can work together as friends and partners.”

She also paid tribute to the Allies for helping rebuild the ruined country, support that helped pave the way for Germany’s membership of the NATO military alliance and of the European Union.

Germany was divided into four zones after the war, with the US, British and French sectors later becoming West Germany, with the capital in Bonn, and the Russian part the communist German Democratic Republic (GDR). The border between the two – and in particular the Berlin Wall, erected overnight by the GDR authorities in 1961 as an “anti-fascist barrier” – became the front line in the decades-long Cold War.

Merkel, who grew up in the GDR, said that September 1 was also a time to remember how Germans, in particular those in the east, were inspired by the 1965 uprising in Hungary, by the Prague Spring in 1958 and by Polish trade union federation Solidarity.

This November 9 marks 20 years since the Berlin Wall was torn down in a peaceful revolution. The following year, in 1990, the two states unified.

There were no major ceremonies in Germany marking the start of World War II although memorial services were held in churches across the country on Sunday and newspapers have given the anniversary broad coverage.