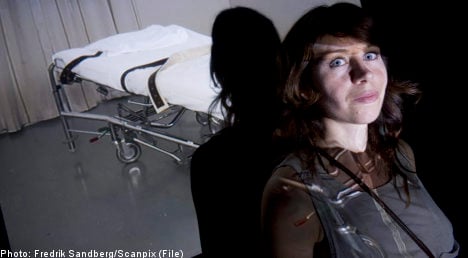 Odell was found guilty of violent resistance and fraudulent practice and was ordered to pay a fine of 25,000 kronor ($3,500).

Odell had denied the charges of false alarm, violent resistance and fraudulent practice, date back to January 21st 2009 when she was detained by police on Stockholm’s Liljeholmen bridge following what at first appeared to be an attempt to commit suicide.

She was then taken to the psychiatric ward at St. Göran’s Hospital for treatment, only to reveal the following day that the whole episode had been faked as a part of her final art exam at University College of Arts, Crafts and Design (Konstfack).

Odell, who has a history of mental illness, explained that she was highlighting deficiencies in Sweden’s psychiatric care which she has argued to be “the most dictatorial part of society we have” where “patients are sometimes not believed”.

While her actions have drawn criticism from police and medical staff, the opening of the exhibition of her work at the college in May generated a great deal of interest in the art world and wider media.