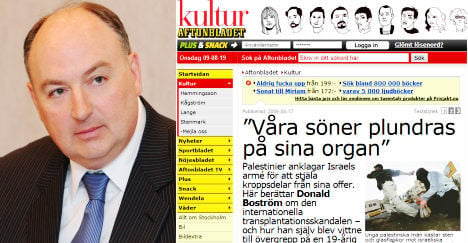 Like many of you, I have been closely following developments concerning the story in the Swedish daily “Aftonbladet” alleging that Israeli soldiers “harvested” the organs of Palestinians. At the outset, it should be abundantly clear to everyone that the preposterous allegations in this story are false and unsubstantiated, and what’s more, harmful, inciteful, and potentially libelous.

To be sure, freedom of speech is a bedrock of democracy, and you should rightly be proud that it is enshrouded in the Swedish Constitution. But no less important alongside that freedom is responsibility and accountability. And that is where the most egregious problems with this issue lie; which could lead to the loss of greater values such as diminishing the sanctity of life. The bitter lessons of our shared history teaches us that there is a short distance between “anything goes” under cloak of “freedom of speech” to actions of incitement and violence. In our recent history, for example, it was all too common for similar, unsubstantiated stories against Jews to be printed, which gave credence to the worst atrocities of mankind. Precisely because of that shared history and experience, as Europeans, we can not accept this type of irresponsible hate speech cloaked as journalism.

While much has been made of Swedish government officials’ responses, I believe that a fundamental issue has been woefully overlooked; the responsibility that lies with both the article’s author and the newspaper’s editors. The allegations made in the story derive from dangerous age-old anti-Semitic canards and hateful blood libel and should be condemned as such. But the central issue is that the author of the story and the “Aftonbladet” editors have been given a green light under the banner of “freedom of speech” to disseminate these false allegations, that, in the words of Swedish Foreign Minister Bildt’s blog, “can stir anti-Semitism”.

Words have the power to uplift us, to inspire us and to improve the world around us. But when used irresponsibly, they have the power to stir hatred and violence. And that is the problem at the crux of this matter. To be sure, many Swedes have spoken out against the story and they should be commended, but the silence with which others and the government have treated the issue is deafening – and alarming.

As president of a non-partisan organization representing Jewish communities throughout Europe, I have the responsibility to ensure that issues of importance to the Jewish community are raised – for the betterment of all minorities in Europe. Because we are all Europeans, one and the same.

I am proud that we have been at the forefront of joint efforts with the European Parliament, the European Commission and European leaders to foster concrete efforts to promote tolerance and reconciliation throughout Europe. And I hope that as they chair the Presidency of the European Union, Swedish officials will continue to enhance these efforts. But as recent trends throughout Europe have shown, unacceptable incidents of anti-Semitism and anti-Zionism are all too real, and in several European nations, including Sweden, are regrettably on the rise.

As we approach a major anniversary of the beginning of WWII and the attempted annihilation of an entire people simply because they were Jews, we must stop and ask ourselves about the values of freedom of speech and the intrinsic responsibility that is bound to that freedom. Yes, freedom of speech is a hallmark of rational and free governments and people. But members of the media have an added responsibility – to fact check and to exercise caution before printing any unsubstantiated article – no matter how many newspapers it may sell. Too many times, incitement and blood libel have masqueraded as “articles” with horrific consequences.

Therefore, I implore you as educated, rational European brothers and sisters, to demand responsibility and credibility from your reporters, their editors and their publishers. What’s more, editorial integrity, responsibility, and accountability MUST be demanded by government officials. Otherwise, the sacred institution of freedom of speech will be worth nothing more than something to wrap our fish in.

The remains of the neo-Nazi were buried at the grave of Max Friedlaender in Stahnsdorf, just outside Berlin, with several figures from the extreme-right scene in attendance at the funeral on Friday.

Samuel Salzborn, anti-Semitism official for Berlin, said late Tuesday that he had filed a criminal complaint because “the intention here is obvious – the right-wing extremists deliberately chose a Jewish grave to disturb the peace of the dead by burying a Holocaust denier there”.

He added that “it must now be quickly examined how quickly the Holocaust denier can be reburied in order to no longer disturb the dignified memory of Max Friedlaender”.

His grave was cleared upon expiration in 1980 and opened up for new burials, under common practice for plots after a certain amount of time has passed.

Friedlaender’s gravestone however remains standing as the entire cemetery is protected under monument conservative rules.

The Protestant Church managing the graveyard voiced dismay at the incident.

In a statement, it said it had accepted the request for burial at the empty grave because “everyone has a right for a final resting place”.

“Nevertheless, the choice of the former grave of Max Friedlaender is a mistake. We are looking into this mistake now,” the church said in a statement.

At the funeral, a black cloth was laid over Friedlaender’s tombstone while wreathes and ribbons bearing the Nazi-era iron cross symbol were laid on the grave for the neo-Nazi Henry Hafenmayer.

Prominent Holocaust denier Horst Mahler, who has been convicted for incitement, was among dozens at the funeral.

Police deployed at the funeral were able to arrest a fugitive from the far-right scene there, German media reported.

Several war graves stand at the cemetery at Stahnsdorf, and these sites are known in far-right circles, the Protestant church administrating the graveyard admitted.

It added that it has worked closely with police to hinder several neo-Nazi marches there in recent years.