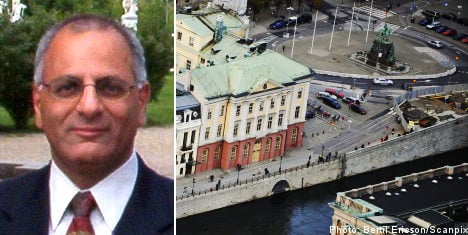 The meeting, with the foreign ministry cabinet secretary Frank Belfrage, had already been planned to discuss routine matters but has now taken on an altogether different importance, according to a TT news agency source.

The diplomatic spat has its source in the decision by the Aftonbladet newspaper to publish the article which details allegations of the systematic harvesting of the organs of Palestinian men.

The argument has escalated further after comments on Thursday by the Israeli foreign minister Avigdor Lieberman slamming Stockholm for distancing itself from a statement by Sweden’s Ambassador to Israel Elisabet Borsiin Bonnier expressing outrage at the article.

Lieberman compared the allegations in the article to old antisemitic lies, such as Jews offering up Christian children for the ritual sacrifice to collect their blood.

“It is regrettable that the Swedish foreign ministry does not intervene when it comes to a blood libel against Jews, which reminds one of Sweden’s conduct during World War II when it also did not intervene,” a Israeli government statement quoted Lieberman as saying.

The comments have caused irritation at the Swedish foreign ministry, according to the TT source.

Lieberman stated that he intended to send a strongly worded protest to Sweden’s foreign minster Carl Bildt, but this protest had not been received by midday on Friday.

Avigdor Lieberman, who is also the leader of the ultra-nationalist Yisrael Beiteinu party, also issued a sweeping criticism of Sweden and the foreign ministry over moves to distance itself from comments made by the Swedish ambassador to Israel, Elisabet Borsiin Bonnier, in which she condemned the newspaper’s decision to publish.