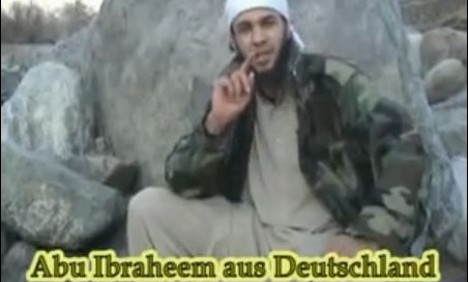 Photo: A screenshot of an online video.

Most recently, two Moroccan brothers from Bonn have appeared in terrorist propaganda videos online. The two men, 27-year-old Mounir Chouka and 24-year-old Yassin Chouka, are thought to be currently in hiding on the border between Pakistan and Afghanistan.

The brothers have produced several videos for the terrorist organisation the Islamic Jihadist Union dressed in military outfits and white robes, but the latest is the first in which they show their faces, the newspaper reported. The are part of growing trend of online Islamist threats intended to encourage Germany to pull its troops out of Afghanistan.

Preaching under the names Abu Adam and Abu Ibrahim since the start of the year, the brothers attack the infidel American and European occupation forces in Muslim nations. They speak in German with Turkish and Albanian subtitles.

“Come and die an honourable death,” proclaims Mounir, encouraging his German Islamist brothers and sisters. Yassin Chouka then encourages all German Muslims to swear allegiance to the leader of the Taliban, Mullah Omar.

Jihadists in Afghanistan would “delight to stand in a hail of bullets from NATO or under German Tornado planes,” his brother adds.

According to the paper, the brothers are known to have come from the suburb of Kessenich in Bonn, taking a journey of radicalisation that led them to the Hindu Kush mountain range on the border between Afghanistan and Pakistan.

However, in the majority of cases, the real names of German Muslims in such videos remain unknown. Most choose pseudonyms such as “Abu Abdullah,” “Ahmad” or “Commander Mohammed,” reported the newspaper. The latter of these is seen in one video to announce “Ich bin kein Berliner,” in a sarcastic reference to John F. Kennedy’s famous declaration of solidarity with the residents of West Berlin.

Much of this information has been published in a 15-page report produced by the Israeli International Institute for Counter Terrorism, based in Herzliya. Keen to make the trend for aggressive references to Germany known, the group’s report lists a range of videos and Muslim forums making specific reference to Germany.

The latest wave of propaganda attacks began in January with videos published by another German of Moroccan origin, Bekkay Harrach. The newspaper reported that the 31-year-old Harrach appears on a video announcing in German that he would “blow himself up for Allah.”

His appearance in an al-Qaida video, entitled “The Rescue Package for Germany,” has reportedly caused concern for the German security services. In it he makes a specific reference to September’s election as the point when the German people will decide their own fate.

“Recently, more people have been travelling from Germany to ‘terror camps’,” Deputy Interior Minister August Hanning told the newspaper. He said this trend poses a threat not only to the German armed forces stationed in Afghanistan “but also for us in Germany.”