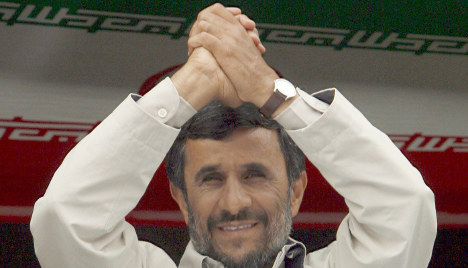 “If there is no progress, we will have to react with further sanctions,” Merkel told the daily Frankfurter Allgemeine Zeitung .

“What is clear is that Tehran, whose president constantly questions Israel’s right to exist, must not get the atomic bomb.”

She noted that the six powers attempting to convince Iran to abandon sensitive nuclear work – Britain, China, France, Germany, Russia and the United States – would gather in September to discuss how to ratchet up the pressure.

“I don’t want to preempt the talks but economic sanctions dealing with the energy sector are on the table. We must wait to see what comes of the talks. We must also speak about them (possible sanctions) with our partners Russia and China,” she said.

Merkel dismissed the complaints of German business leaders that they are bearing an unfair share of the burden from existing economic sanctions against Iran.

“We must, as part of the international community, accept our part of the responsibility for the desired success of a diplomatic solution (to the dispute with Iran),” she said.

“If Iran got atomic weapons it would a dangerous situation. That is why sanctions would be justified.”

US lawmakers have been pushing President Barack Obama to squeeze Iran by targeting its heavy reliance on petrol imports and other refined oil products.

Because of a lack of domestic refining capacity, oil-rich Iran is dependent on petrol imports to meet about 40 percent of domestic consumption.

Iran has defied UN Security Council sanctions by continuing to enrich uranium, a process which makes fuel for nuclear power plants but can also form the core of an atomic bomb.

Washington and Israel, widely considered the Middle East’s sole if undeclared nuclear armed state, and many of their Western partners suspect Iran is trying to build atomic weapons under the guise of a civilian nuclear program, a charge Tehran denies.