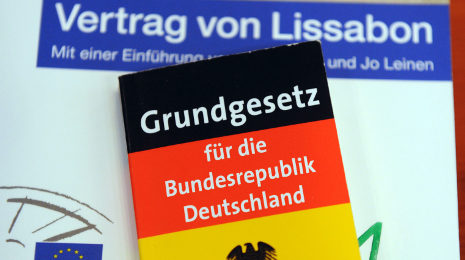 Thomas Oppermann of the Social Democrats’ parliamentary group said his party aimed to wrap up negotiations with Chancellor Angela Merkel’s conservative Christian Union on Tuesday, adding there were only “technicalities” to work out.

“These should not pose any problem,” he told reporters.

Germany’s top court ruled in June that the Lisbon Treaty – aimed at streamlining decision-making in the 27-nation bloc – must be put on hold until a law protecting national parliamentary powers is passed.

The Christian Social Union (CSU), the Bavarian sister party to Merkel’s Christian Democratic Union and a traditionally eurosceptic party, then produced a 14-point list of demands to block political encroachment from Brussels.

The compromise rejects the CSU’s more controversial points including binding the German government to consult the national parliament in EU deal-making and requiring referendums before the bloc can accept new members.

in steps taken by the EU toward greater integration of its members – that is,

He said the Christian Union, Social Democrats, liberal opposition Free Democrats and the ecologist Greens now aimed to jointly present the legislation, which will likely come in the form of four bills. “Politically, we have basically wrapped it up,” he said.

The timetable is tight as the Bundestag plans to vote on the draft law September 8 followed by the Bundesrat upper house on September 18, nine days before the German general election.

EU officials fear that if Germany fails to approve the bill before its voters go to the polls, it could bolster opponents of the treaty in the three states that have not yet endorsed it: Ireland, the Czech Republic and Poland.

Only Ireland is constitutionally bound to put it to a referendum, which is to be held on October 2.

The Lisbon Treaty is designed to facilitate decision-making in an EU which has expanded to encompass the former communist countries of eastern Europe.

The bloc has almost doubled in size since the current Nice Treaty came into force.

If the Lisbon Treaty were to replace it, the EU would do away with the current unwieldy system of the rotating presidency in favour of the selection of a leader for a limited term. A powerful foreign policy supremo would also be appointed.

The treaty itself is a watered-down version of the European constitution that was rejected by voters in France and the Netherlands in 2005.