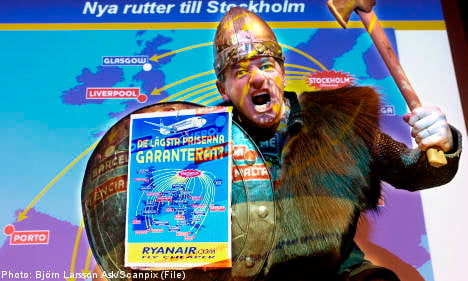 Reading Ben Kersley’s article in The Local (The lost art of travel: Catching the ferry to Britain – Aug 10th) got me thinking about travel to and from Sweden.

I have spent 40 years working in the aviation industry, and sure I would like to travel today the way that I did 30 years ago, flying around the world on national airlines in First or Business, being pampered by attentive cabin crew who had four day layovers in the same five star hotels that I stayed in.

Then the company was paying and executives expected high end travel as a perk. The majority of air travel was on business and there was standard pricing on all routes and it did not matter who you flew with, the cost was the same. The ticket agent just calculated the price from the standard IATA fare book, your choice was the class you travelled and the airline that you flew with.

When you travelled abroad for leisure, you either went by train/boat/bus or took an Inclusive Tour to the Med with the ‘bucket and spade’ brigade. On the IT flights you never had the level of comfort of scheduled flying, a “knees to your chin” 28/29 inch seat pitch, instead of the 33-40 on the scheduled airlines and a plastic meal instead of 4 courses served on porcelain.

The problem with IT was that they where always a package tour, hotel and flight included. Tour operators were not allowed to sell seats only, that was the preserve of the scheduled airlines. This meant that travelers who just wanted to fly from A to B to visit friends and relations and stay free, had to bite the bullet and pay the high prices charged by the scheduled airline cartel or find a less expensive way to travel.

In the 80s, when living in the UK, I, like Ben, made the trip between the UK and Sweden by boat, using the DFDS 24 hour crossing from Harwich to Gothenburg to visit my wife’s family. The boat, including the best cabin, cost less than half the price charged by SAS. In those days most Swedes would not think of flying for leisure, unless it was a package tour to the Med. Our Swedish visitors when we lived in the UK during the 80s and early 90s came by boat.

The whole European aviation scene changed in 1996 when the EU “Open Skies” deregulation of the scheduled airline business was enacted. This allowed airlines such as Ryanair to compete with the national carriers through Europe.

It is no coincidence that the first route that Ryanair opened in 1997, after they where free to compete, was Stansted to Skavsta. There where two factors which made it the best decision.

1. Scandinavia has always been the most expensive place to fly to in the world, on a rate per mile basis, with the Swedish/Norwegian/Danish state-sheltered monopoly of SAS. Ryanair was counting on a large potential market for cheap air travel from Sweden.

2. The end of the Cold War resulted in the de-commissioning of a number of military airfields, such as Skavsta, which where handed over to the local municipality to operate and try to get some income from.

Ryanair was able to establish a relationship with Skavsta that was in the interest of both parties. Ryanair gained favourable charges at the airport and a destination close to the main population centre, while Nyköping municipality gained ancillary business, and new employment opportunities.

Swedes and ex-pats living in Sweden have gained at lot by the arrival of Ryanair. With the ability to fly to and from Sweden at a fraction of the price still charged by SAS.

Between 1997 and 2002 I was able to make more visits to Sweden than ever before at a fraction of the cost even of the boat (which suffered so much from Ryanair’s competition that the Harwich – Gothenburg route closed down). Since moving to Sweden in 2003, I am able to make several visits a year to see the family still in the UK without breaking the bank.

Granted the experience of flying with Ryanair is not great. The hidden charges are annoying, the cabin crew are not the best and the seat pitch is back to the “knees to your chin” IT flights. But, if you just want to get from A to B for the cheapest price (about a quarter of the price of SAS) then Ryanair is the way to go. I can suffer for two hours; I just think of the money I’m saving.

With a large aircraft base and 39 destinations from Skavsta, Ryanair must have found that Swedes love Ryanair. Well maybe they don’t love them – just the low fares that leave them more money in their pocket for a drink at their destination.

Rick Methven lives in Sweden and is the owner of the Aerocom Aviation Software company.