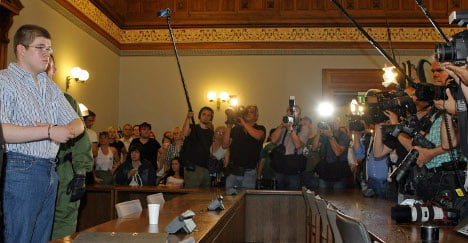 The 19-year-old released a statement admitting to the charges of murder, assault, rape and sexual assault – though he denied that the August 18, 2008 murder was premeditated.

“First I would like to apologise to Michelle’s family, because I caused them such great pain,” the defendant said, though the girl’s family did not appear in court. They have chosen instead to send a lawyer on their behalf as joint plaintiffs. Months ago they returned an unopened letter from the accused.

According to State Prosecutor Klaus-Dieter Müller, the teenager planned the crime in advance, getting to know Michelle in his neighbourhood and following her for about a year before luring her back to his apartment last summer.

“The child knew the accused and innocently followed him into the apartment,” Müller said.

She first became suspicious and tried to flee when the accused began to handle a roll of tape. He gagged her and then force-fed her alcohol before raping and suffocating her.

Michelle was on her way home from playing with friends when she went missing, and was found dead three days later in a duck pond by a local resident out for a walk.

Despite thousands of tips, police found few clues leading to the murderer. They questioned more than 1,000 witnesses and investigated 1,700 leads, collecting some 5,200 pieces of evidence. The 75-officer special investigation team also took voluntary saliva DNA samples from friends, neighbours and relatives of the girl.

Seven months after Michelle died, the young man turned himself in to police before he was scheduled to be tested.

His lawyer Malte Heise said the 19-year-old is developmentally disabled and will likely be tried as a minor. Under this law he would serve a maximum sentence of 10 years.