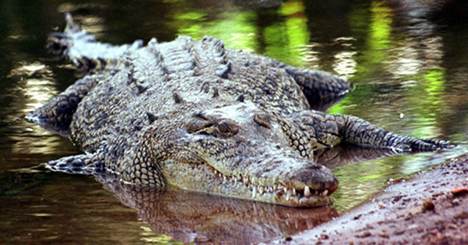 A file photo of a crocodile. Photo: DPA

The 15-year-old girls were enjoying a swim near the Bavarian town of Pressath Friday evening when they heard a noise, a police spokesman told the DDP news agency.

The pair then saw a reptile crawl from a bush and into the pond, where it disappeared.

By the girls’ account, the croc was about a metre long. Some crocodile species are between one to 1.5 metres long as adults, though others can grow to nearly 5 metres in length. Crocodiles are not native to Europe, however, some Germans with an exotic taste in pets have been know to release them into the wild once they get to big for the bathtub.

Police closed the swimming hole and trained search dogs and the fire department are examining the pond and its surroundings.