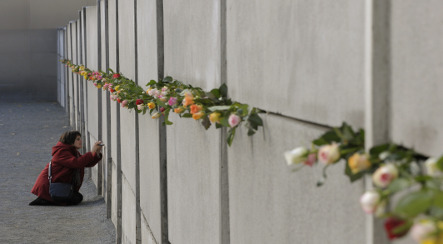 In June 1962, 10 months after the communist East German regime built the despised Wall, the West German men risked their lives to try to reunite with their wives and children in East Berlin with a bold plan to burrow their way through a makeshift tunnel.

However, a brother of one of the wives was an informant for the dreaded Stasi secret police and betrayed them, so when the men finally cleared the underground passage they built to the East, armed men were waiting.

The two men surfaced, only to be met with a hail of bullets by Stasi officers. One of the would-be rescuers, 22-year-old father Siegfried Noffke, died on the way to a prison hospital. The other, Dieter Hoetger, suffered seven bullet wounds and languished for more than 10 years in Stasi prisons before the West German government bought his freedom from East Germany – a common practice at the time.

Now nearly 70, Hoetger fought back tears as he told his story at the unveiling of a memorial plaque by a historical preservation group Berlin Underworlds attended by political officials and family and friends of the men.

“They shot at us without warning with machine guns,” he said. “We will never forget Siegfried Noffke.”

He told AFP his “reckless” plan to bring across a total of 13 people was hatched because he could not bear the separation from his wife. “We met in the East but I went to work in Hannover, in the West, because the pay was better,” Hoetger said.

“The construction of the Wall took us both by surprise. I had to muster all my courage to start work on the tunnel because I loved her.”

Hoetger said that after his capture, his wife was also jailed. When she was released, she visited him only twice in prison and they eventually divorced due to Stasi pressure.

Between December 1961 and April 1982, work began on 70 separate tunnels through Berlin’s sandy soil with the aim of crossing under the Wall to the West, according to Berlin Underworlds. Only about 17 of them allowed for a successful escape from the East. Most of the remaining traces of the tunnels were destroyed in construction work in recent years.

Authorities confirmed Tuesday that at least 136 would-be dissidents were killed at the Berlin Wall between its erection on August 13, 1961 to stop an exodus of East Germans to the West, and its fall in a peaceful revolution on November 9, 1989. Most of the victims were shot by East German border guards, many of whom faced trials after unification.

However, the vast majority received only suspended jail sentences as they argued that they had been following the orders of their superiors.

Addressing MPs at the ceremony, Hoetger had harsh words for investigators, saying they had failed since national unification in 1990 to bring Noffke’s killers to justice.

“The Stasi murderers are still at large because Berlin’s sloppy justice authorities never managed to bring charges against them,” he said.