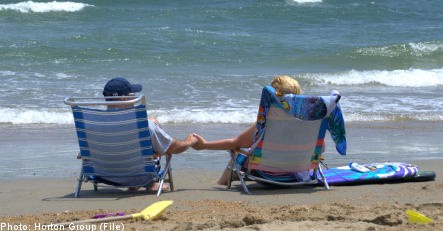 Swedes are also among those that spend the least amount of time at work each week, almost an hour below the EU average.

The report from the European Foundation for the Improvement of Living and Working Conditions (Eurofound) is published annually and shows an overall trend that EU citizens spend less a decreasing amount of time at work but are more stressed while there.

“We have been publishing the report for ten years now and have noticed some reduction in working hours. The trend is slight but it points that way,” Camilla Galli da Bino of Eurofound told The Local on Friday.

Swedes enjoy an average 33 days of “collectively agreed” annual leave, the report shows, while the average across the EU is 25.2. Runners-up in the holiday stakes are neighbouring Denmark with 30 days and Germany with 30, while the Cypriots and the Estonians have to make do with 20.

“The Swedes always come out on top here. Generally you can say the enlargement countries work longer and have shorter holidays, but Sweden has long been in a class of its own,” Galli da Bino said.

It is also more common for Swedes to take longer periods of holiday. While a common summer holiday in the UK is two weeks, Swedes are typically entitled to take four consecutive weeks.

Despite the long holidays, Sweden is also among the countries with the shortest “collectively agreed” working week – with 37.5 hours only the UK, Denmark and France have shorter.

Over the past decade Eurofound has found that in the EU15, agreed working hours have declined by 1.8 percent from 38.6 hours to 37.9 hours.

The 12 new member states have boosted these figures however, as only two have agreed working weeks below the EU27 average.

The report also contains figures showing the number of actual weekly working hours and shows that Swedes put in a average of 39.6 hours at work, 0.8 hours below the EU average, and a full 2.2 hours below the Romanians on 41.8 hours.

Sweden has one of the lowest statutory maximum working weeks in the EU with 40 hours, only Belgium is lower on 38. The EU Working Time Directive stipulates a maximum of 48.

The Local made attempts on Friday to contact a Swedish representative at Eurofound for further comment on the report, but was told he was on annual leave until mid-August.