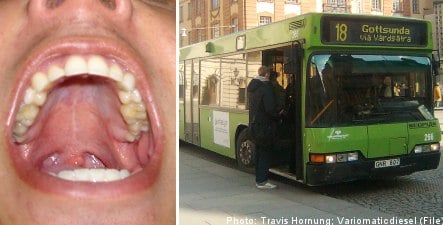 The motorist was in the left lane when the bus, which was in the right lane beside the car, started to make a left turn, forcing the car toward the ditch, the Upsala Nya Tidning (UNT) newspaper reports.

The driver of the car then followed the bus to its next stop, at which point he got out of his vehicle and hit the bus driver in the face.

A second off-duty driver on the bus at the time then exited the vehicle and began taking pictures of the car to document the licence number.

The motorist reacted angrily to the picture-taking bus driver, however, and a new physical altercation ensued.

The row ended with the motorist having his cheek bitten bloody by the second bus driver.

Police arrived on the scene to call things down shortly thereafter, with one officer driving the motorist to Uppsala University Hospital for treatment of his tooth-marked face.

Meanwhile, police continue with their investigation, reviewing several eye-witness reports and complaints which were filed in connection with the incident.