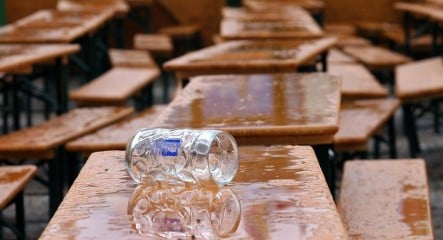 Drowning in the sorrow of a rainy summer. Booooooooo. Photo: DPA

Breweries and distributors have sold 4.93 billion litres of beer in the first half of this year. Compared to the same time period last year, sales have dropped by 230 million litres, or 4.5 percent.

Sales of mixed-beer beverages fell even further. Those who enjoy their beer with colas, fruit juices, lemon-lime soda or other non-alcoholic mixes drank 7.4 percent less than in the same period last year.

Most of the beer (85.5 percent) sold was consumed within Germany. Destatis also reported that duty paid on beer exports dropped by 4.1 percent.