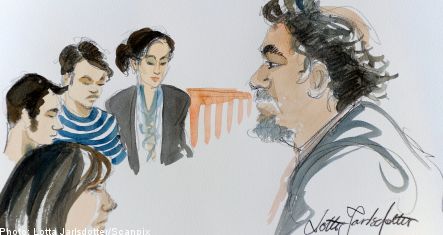 Despite the fact that the children are born in Sweden, two of them needed interpreters in court. They testified about abuse, fear and never having attended school.

The father warned of the dangers of Swedish society, telling his children they would be raped and lobotomized and that all Swedes were racists.

“If all the children in Sweden were lobotomized, why are they so happy?” recalled one of the daughters, according to the Aftonbladet newspaper.

Between September 2003 and March 2004, the children were confined to the family’s apartment, never leaving the dwelling once, according to public prosecutor Johan Strömbäck.

Three of the children have sought compensation totaling 148,000 kronor ($20,000) for deprivation of liberty (frihetsberövande), including missing out on their education.

During a morning court hearing, three of the man’s four children testified about their experience while confined by their dominating father, who is a native of Iran.

The 17-year-old son related how he peered out of the bathroom window and watched other children play, thinking that “we want to go to school, we want to live like other children.”

“It was hell, it’s impossible to describe. If I think about it, my entire soul quakes,” he said.

His brother, who is a year older, described how he spent long periods crying and crying, and talked about his desire to go and play football with other children.

But he wasn’t allowed to go outside, or to have any friends.

“We always got to play the quite game,” explained one of the sons, according to the Upsala Nya Tidning (UNT) newspaper.

“I remember one time when I was horsing around loudly and he took me to another room and forced a glass jar filled with pepper in my mouth.”

Both brothers needed the assistance of an interpreter, but their 22-year-old sister testified in clear Swedish.

She said that she had to fight to learn the language, despite the fact that she was born in Sweden, just like her brothers.

She explained that she clearly remembered how smug her father was when he learned that children who were not residing in Sweden were exempt from compulsory school attendance.

“He has deprived us of our rights as Swedish citizens,” the daughter said.

“I’ve never attended school, either in Iran or in Sweden. Not one single minute.”

The children’s mother also testified during the emotionally charged hearing.

“They don’t know what the inside of a school, or a classroom, or a bank looks like,” she said.

“I sometimes felt like he had control our breathing.”

Shortly after her husband’s arrest on June 27th, the woman filed for divorce, citing that the man had abused her and the children for 20 some years. She has also requested that she be given sole custody of the two children who are still under 18.

The youngest child, a 16-year-old daughter was treated differently than the others, and doesn’t believe she was deprived of her freedom.

Prosecutors were delayed in bringing charges against the man after uncertainties arose regarding his identify.

According to the original indictment, the father is listed as being 68-years-old, but according to Strömbäck he is actually a decade younger.

“He says himself that a mistake was made in the translation of his original documents,” the lawyer said.

When the 58-year-old man took the stand in the afternoon, he denied all the accusations against him, claiming his wife and children were lying.

He said his children had made up their stories out of fear of their mother.

“She’s taken over the whole family and controls their lives, not me,” he said.

He claimed that his wife was a “fundamentalist” and wanted to send the children to schools in Iran run by mullahs.

The father also refuted accusations that he had beaten his children.

“I’m against violence, it’s the mother who is violent,” he said.

“She does what she wants in the name of Islam.”

He said his children did in fact attend school in Iran and that there are diplomas to prove it at the country’s education ministry.

However, the 58-year-old was unable to produce any diplomas in court.

According to him, the children’s mother forbid them from attending school in Sweden.

“They want to make me look like a monster,” he said.