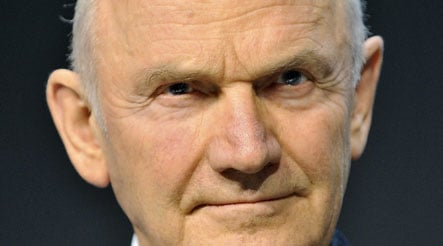 “I don’t like to be second,” he once famously declared.

Piech, 72, put everything he had into the years-long fight, and even took the rare step of publicly exposing family disputes, in particular with his cousin, Wolfgang Porsche. Piech seemed isolated at times, a far cry from his media nicknames of “the emperor” or “patriarch.”

But over the course of several decades, the grandson of Ferdinand Porsche has overcome obstacles and disgrace, bouncing back when the press said he was finished. His dream was to create a German auto giant that made everything from heavy trucks to limousines, able to compete with the best to become number one.

Fifteen years ago, Piech called for an “auto war,” with the Japanese car maker Toyota in his sights as foreign brands were already chipping away at US domination of the sector. Over the course of a decade, Piech patiently assembled his puzzle. Head of VW from 1993 to 2002, he reorganised the group and cleaned up its books at the cost of tens of thousands of jobs. VW also began launching new models, in particular via its high-end unit Audi, which now competes with Mercedes and BMW.

Head of VW’s supervisory board since 2002, Piech also got the group involved with the heavy truck maker MAN and is pushing for a tie-up with Scania of Sweden. VW owns the biggest stake in each company.

Piech has been instrumental in getting Porsche and VW closer together, a move that began in 2005. He swears it was not his idea however, insisting it was suggested by Porsche head Wendelin Wiedeking.

A honeymoon period between the two companies quickly turned sour however, with Wiedeking sparking opposition from VW unions and directors following a series of provocative remarks, notably that there were no “sacred cows” at VW.

Wiedeking audaciously built up a 51 percent stake in VW – with share options giving him even more – but the financial crisis put paid to his plans to swallow up the much larger VW. The approach left Porsche deep in debt and caused squabbles among the families, but on Thursday, Wiedeking threw in the towel and VW appeared to have won the upper hand. It now plans to take over Porsche and make it just another brand.

Born on April 17, 1937 in Vienna, Ferdinand Piech was always fascinated by automobiles.

“I have played with technical things since my earliest days,” he said.

Ernst August, 66, gave his son the fairytale-like Marienburg castle and several other properties between 2004 and 2007, but now wants them back citing  “gross ingratitude”, the district court of Hanover said in a statement on Tuesday.

It is the latest public spat to hit the aristocratic family, whosepatriarch has over the years been nicknamed “the party prince” and even “the brawling prince” over his jetset lifestyle and drunken escapades.

According to the court statement, Ernst August filed a lawsuit at the end of last year seeking to revoke the gifts of Marienburg Castle, the Calenburg manor house and a royal property in Herrenhausen.

He accuses his son, Ernst August junior, of acting against his wishes and going behind his back by offering Marienburg Castle to the state of Lower Saxony as public property – partly because of the huge costs of maintaining the mid-19th century Gothic-style building.

READ ALSO: Just one sixth of Germans want own monarchy back

The plaintiff, who lives in Austria, also accuses his son of improperly appropriating artworks and antiques owned by the family.

Ernst August senior estimates the total value of the disputed properties and items at some five million euros, the court said.

Ernst August junior, 37, told German news agency DPA that the case had no merit, saying all the arguments raised “have already been invalidated out-of-court in the past”.

He said the deal struck to transfer ownership of Marienburg Castle to the regional authorities of Lower Saxony was “legally secure”.

“There's nothing that stands in the way of the long-term preservation of Marienburg as a central cultural monument of Lower Saxony, open to all,” he said.

The court has not yet set a date for a hearing.

Ernst August senior has been feuding for years with his son over the family's royal properties.

So severe was the spat that he declined his official consent to his son's 2017 marriage to Russian-born fashion designer Ekaterina Malysheva and stayed away from the wedding.

Princess Caroline, who has been separated from her husband since 2009, did attend the nuptials.