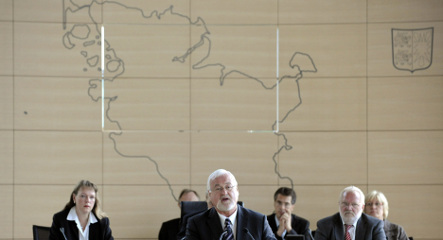 Marking the bitter end to a two-year grand coalition government in the state, all parties in the state legislature aside from the premier’s own Christian Democratic Union (CDU) voted against the measure. The CDU’s MPs abstained, leaving the only vote backing Carstensen cast by the legislature’s president.

Carstensen was forced to call the confidence vote earlier this week after his former coalition partner the centre-left Social Democratic Party (SPD) refused to dissolve parliament. The CDU and the SPD have presided over a total breakdown of their government amid recriminations of unreliability and lying.

“This alliance between the CDU and SPD has no future,” Carstensen told parliament before the vote. “Things cannot continue as they have up till now, as the trust between the former coalition partners is permanently destroyed.”

Carstensen had pushed for an early election to coincide with Germany’s national poll in September in the hopes his conservatives can piggyback on support for fellow Christian Democrat Chancellor Angela Merkel. His aim is to ditch the SPD for his preferred partner the pro-business Free Democrats (FDP).

The SPD’s leader in Schleswig-Holstein, Ralf Stegner, attacked Carstensen ahead of the vote for supposedly breaking their coalition on pretence. “Much points to the conclusion that what you’re doing here is unconstitutional,” Stegner said. “Your resignation would have been the more honest path.”