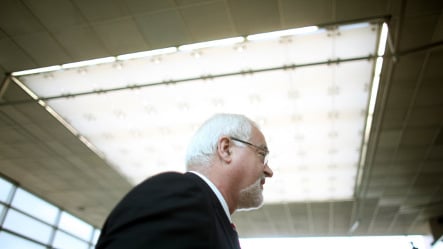 The conservative Christian Democratic (CDU) leader had hoped to end his coalition with the centre-left Social Democrats (SPD), but they voted unanimously against the motion to disband the state legislature.

While the CDU claim the SPD has refused to back the government’s budgetary cuts, the Social Democrats accuse Carstensen of failing to involve them in key decisions and lying to parliament about it.

Aware of momentum for the conservatives nationally, Carstensen wants to piggyback a new vote on the national election on September 27, with the aim of ditching the SPD for the pro-business Free Democrats (FDP).

However, the Social Democrats made clear on Monday that they won’t be the ones to end the ruling coalition despite the poisoned atmosphere in the Schleswig-Holstein capital Kiel. Without the SPD’s votes, Carstensen failed to get the two-thirds majority needed to dissolve parliament, making a confidence vote on his premiership necessary.

Ralf Stegner, the state SPD boss, said Carstensen had tried to end parliament in a “dishonest way” that the premier had planned to break the coalition months in advance.

The confidence measure will now take place at 10 am on Thursday. With all likelihood, the legislature will not back Carstensen, allowing the fresh elections he wants.