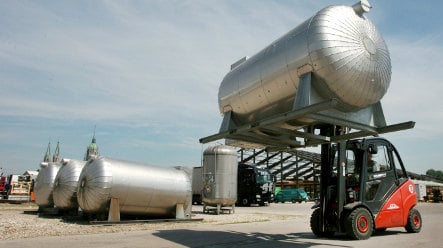 The tot managed to climb onto the forklift and disarm the brake while her father was distracted momentarily by business on Thursday. The heavy machine then rolled five metres into fuel tank, and one of the forks pierced the wall of the 1,600 litre chamber.

“We’re not really sure how the little girl released the brake – four-year-olds don’t have the kind of strength it takes to remove the brake on a forklift, which is more like a tractor than a car,” Klaus Hinderer, police spokesman for the Waiblingen area of Baden-Württemberg, told The Local.

Fire crews responded quickly to stop the flow of oil from the tank but 500 litres of heating oil went into the sewer system despite their efforts. Hinderer said no environmental damage was expected, adding that fire crews had neutralized the chemicals in the spill.

While the little girl was uninjured in the incident, Hinderer is sure she didn’t get away with it entirely.

“I’m sure her father was angry with her, but also glad that she was fine and walking away from the accident,” he said.