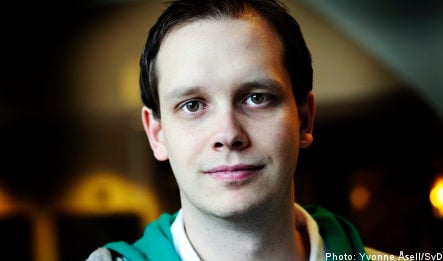 Plans for the service, which takes its name from Ipred, the term commonly used to refer to a controversial new anti-file sharing law, were announced in early April shortly after the new law took effect.

Since then, more than 170,000 users have signed up for the chance to join the new virtual private network (VPN) service, which will allow them to keep their identity hidden when surfing the internet.

“Those are impressive figures and they scare me,” he told the TT news agency.

“I would prefer if we could avoid having this type of service but the current Stasi regimes make it necessary.”

Around 13,000 people have beta-tested Ipredator, and this weekend the service is expected to go live, allowing those who have already signed up to pay about €5 ($7) per month for the chance to keep their IP-addresses hidden using the service.

In addition to Sunde, Pirate Bay veterans Gottfrid Svartholm Warg and Fredrik Neij are also involved with the scheme, as are a number of others who have agreed to help with Ipredator.

The service is being offered in cooperation with Trygghetsbolaget, a company based in Lund in southern Sweden, which is responsible for the commercially available Relakks VPN service.

“One of the reasons we want to work with them is that we can’t have our own customer service centre,” said Sunde, who added that the site’s servers will be kept in Sweden to minimize the chance of them being monitored by Sweden’s National Defence Radio Establishment (Försvarets Radioanstalt – FRA), an agency tasked with observing cross border web traffic.