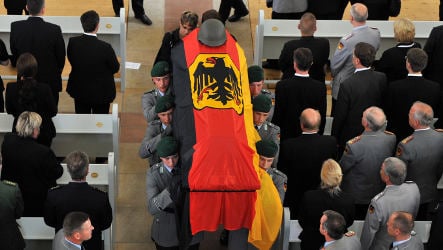 According to daily Sächsische Zeitung on Thursday, the insurance companies have not honoured the claims because of a so-called “war clause,” which states that payment is void if “the damage is directly or indirectly caused by war or civil war events.”

Defence Ministry spokesperson Matthias Mantey confirmed with The Local that the government had stepped in to compensate for the loss for surviving family members.

“The federal ministry took over the payments to make sure the families of the soldiers are compensated,” Mantey said.

According to Mantey, the insurance applies not only to soldiers, but anyone who goes with the federal army into a combat zone, such as journalists.

Berlin doesn’t use the word “war” to describe their NATO mission in Afghanistan. Defence Minister Franz Josef Jung, a member of Angela Merkel’s Conservative Christian Democrats, has said that the federal army (Bundeswehr) is not engaged in war according to international law, which defines it as a conflict between states. As Germany has not declared war with Afghanistan, the Bundeswehr is involved in a stabilization mission there, in which some fighting may occur.

But because German insurance companies define the conflict as war, given that some 3,700 German soldiers are serving as part of the NATO International Security Assistance Force, the government was forced to step in.

The Defence Ministry said the amount paid out so far in the 21 cases correlated with the maximum payment the insurance companies owed.

“We want to do our best to make sure those left behind are not left with debt,” Mantey told The Local.

Berlin also provides a tax-free hardship payment of €60,000 to soldiers’ widows, widowers or surviving children. In the case of an injured soldier, the state also supplements any payouts from insurers.