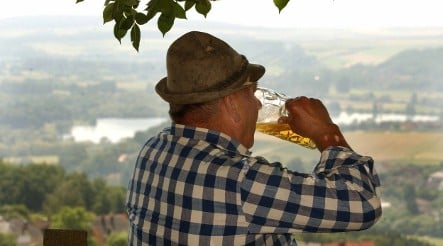 “We can show an increase in all German states as far as this age group is concerned,” DAK Bavaria spokesman Claus Uebel told The Local, referring to new statistics gathered on the some 6 million people covered by the company. “There’s really no focal point. It applies to all German states.”

The insurer did not collect data on seniors above the age of 60.

Between 2004 and 2008 DAK registered nearly 15 percent more hospital stays related to alcohol consumption in the southern state of Bavaria for this age group. In the past year, more than 802 people received clinical treatment, compared to 2004, when 683 needed medical care.

“In comparison to other age groups, this rate of increase was the highest,” DAK noted in a statement on Wednesday.

Meanwhile the state of Hesse registered a 42 percent increase, from 435 hospital admissions in 2004 to 629 four years later, according to DAK statistics. In both the German states of Rhineland-Palatinate and Lower Saxony, the number of alcohol poisonings rose by more than 28 percent.

The insurer’s figures also showed alcohol abuse on the rise among seniors in North Rhine-Westphalia, Baden-Württemberg and Mecklenburg Western-Pomerania.

DAK noted that age factors increase the risk of depression and alcohol abuse, noting that older people have more difficulty breaking down alcohol due to a lower liquid content in their bodies. Additionally, the insurer linked the trend with a general increase in psychological strain over the past few years.

“‘Why is something that we can’t 100 percent answer,” Uebel told The Local. “People could turn to alcohol more easily due to psychological illnesses.”

Alcohol consumption is on the rise for other age groups as well. DAK registered increased alcohol abuse among the 18-and-under group. The trend among youth was no surprise for the insurer, Uebel said, but it was a different story for the senior set.

“We were really surprised by statistics for the older group,” he added.