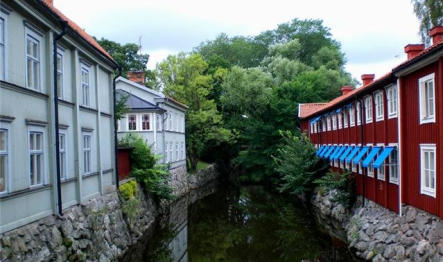 The history of Västerås stretches back more than a thousand years; at 59 minutes, it’s less than an hour away from Stockholm by rail, yet worlds away in atmosphere.

The train goes past some rather colourless industrial estates and one very smelly farm—survive these challenges to the senses and be rewarded with the charmingly evocative old town centre of Västerås, located in Västmanland county. Of course, Västerås is as thoroughly modern a city as any in Sweden, but it is the unique attractions of its historic past that grab one’s attention immediately upon arrival.

Västerås Central Station is located right across the street from a big park, Vasaparken to be precise, which serves as an ersatz looking glass; a walk through it takes you back in time on the other side. The first step, though, is not so far back—only to 1963, the year when the imposing City Hall’s current structure, designed by Sven Ahlbom, was completed. Today, the golden sculptures adorning its western façade complement the 65m tower, which houses 47 bells, the largest peal (set of bells) in Sweden. Sharing the same square, Fiskartorget, is the genteel home of the Västerås Konstmuseum.

It is further north that the city shows its age—in a good way. The Church, as was so often the case in medieval times, was the centre of life in the town. Today, past the seemingly whimsical statue of Bishop Johannes Rudbeckius to the left of its entrance, the very imposing Västerås Domkyrka remains one of the city’s principal attractions and houses one of Sweden’s largest organs, dating from the 17th century.

On what used to be grounds of the cathedral, across the street among several former service buildings, sits the small structure known as the Proba, a prison for priests, government officials, and other offenders of the time. The Proba was used in this capacity right up until 1801. Probas were not uncommon in the past, but they certainly are today; in fact, the one in Västerås is the last of its kind. Not that there’s a lack of need.

A bit further north again is the jewel in the Västerås crown of attractions, the humble yet captivating Kyrkbacken. Here in the Church Green, amid the small cabins that housed the city’s poor and derelict during the 16th century, new life springs forth from the quaint homes, art galleries, and assorted creative businesses revitalising this atmospheric quarter. If Kyrkbacken were in a larger city in another country, the fast-food outlets and T-shirt shops would have taken over long ago; there is none of that here. Indeed, it is the complete integrity of the place that adds to its charm; with the well-tended garden lanes adding to the ambience, the sum is greater than its parts. Also dating from the 16th century is the nearby Botaniska Trädgården, site of the oldest horticultural school in Sweden; today, several modern sculptures complement the plants and peacefulness.

Not all the Old Town’s attractions are old. There are numerous cafés with outdoor seating to breathe in the atmosphere along with the aroma of fresh coffee, and the many parks and gardens make for pleasant strolling. On Stora Torg is a modern sculpture called The Asea Stream portraying several men on their bicycles on their way to work at Asea Brown Boveri, which has its worldwide headquarters in the city. The statue was created by Västerås artist B.G. Broström and may also be considered a tribute to the city’s cycling paths; there are more than 300km of paths for two-wheeled enthusiasts.

Four-wheeled enthusiasts should circle the dates 2-4 July on their calendars, or key them into their PDAs, and make plans to spend US Independence Day at Västerås’ Power Big Meet, one of the largest car meets in the world, bringing together thousands of owners of American-made cars and their admirers—and, undoubtedly, a lot of bored wives and girlfriends once again keeping their men appeased. Not that women are uninterested, of course; they figure highly in the number of visitors eager to see the results of the judging to determine Best In Show. A swap meet is also part of the fun; where else in Sverige can you find a bumper for a ’57 Ford Fairlane? Early arrivals participating in the show will be rewarded for their bleary eyes with one of a limited number of Power license plates, which will become instant collectors’ items the moment they are distributed.