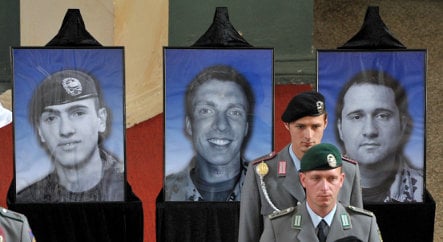 The three soldiers, Alexander S., Oleg M. and Martin B., all aged between 21 and 23, were commemorated at a service in Bad Salzungen, in the state of Thuringia, where their armoured infantry battalion was based.

The three soldiers were killed in the Kunduz region when their transport vehicle fell into a river during an exchange of fire with Taliban fighters. Two were killed instantly while the third died shortly after.

Alexander S. and Oleg M. had only been sent to Afghanistan a few days before their deaths, while Martin B. was about to be sent home. Hartmut Gremler, the Catholic priest giving the service said that the soldiers had seen the “horrific face of violence and terror.”

In a speech given at the funeral, Jung said that their deaths showed “what a high price we pay to live in peace and freedom in Germany.” But he added that a withdrawal from Afghanistan is out of the question. This would lead to the country falling into the hands of the Taliban again, Jung said.

The situation in the Kunduz region has been unstable for months, with the German soldiers taking part in reconstruction missions increasingly threatened by the local Taliban. Around 1,100 German soldiers are stationed in the region.

Some 3,700 German troops are fighting in Afghanistan, where they form part of the 60,000-strong International Security Assistance Force led by NATO and made up of troops from 42 nations.

The mission is extremely unpopular in Germany and 35 troops have died since 2002 despite being based in the relatively peaceful north of Afghanistan.