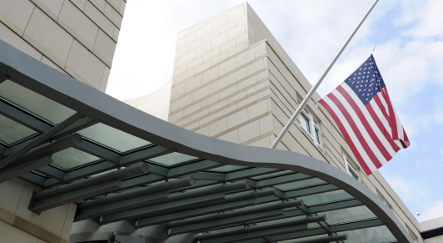 Who will take up the empty office at Pariser Platz? Photo: DPA

Murphy, national finance chairman for the Democratic National Committee since 2006, is at the top of Obama’s short list to replace Bush’s nominee William R. Timken Jr., who left his post when the new administration came into office.

The 52-year-old multi-millionaire has good contacts in Germany after serving as head of the Goldman Sachs German division and living in Frankfurt in the 1990s.

“He is expected to be named by Obama soon,” the magazine said.

Press spokesperson for the American Embassy in Berlin Bruce Armstrong told The Local that he could not confirm Germany’s approval.

“The first public, official step will be an announcement by the White House,” he said.

According to Der Spiegel, diplomatic circles are buzzing about how long it has taken the Obama administration to appoint the next ambassador, even after rumours of Murphy as top choice began in May.

“Sources close to the White House have attributed the delays to a comprehensive new review for top posts in the Obama administration,” the magazine reported.

Once the White House names its pick, the new ambassador won’t arrive in Berlin until he or she is confirmed by the US Senate.